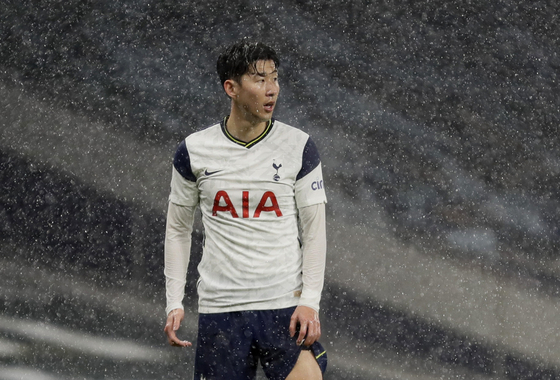 
Tottenham Hotspur may be waiting until the 2020-21 season ends to offer Korean striker Son Heung-min a new deal, according to media reports on Tuesday.

Rumors that Spurs were planning to offer Son, who started on blistering form this season and is currently the No. 3 goal scorer in the English Premier League, a significantly higher contract have been circulating since October last year. Son is currently contracted with the London club until 2023, but the team reportedly wants to offer him a longer deal with a significant pay raise.

Speaking to the press earlier this week, Tottenham manager Jose Mourinho implied that signing a new deal is being held off because of the ongoing coronavirus pandemic.

"Probably this situation with the world where we are, the Covid situation, I do not think it is the right moment for players and clubs to discuss contracts with so many people losing jobs and not working and difficulties," Mourinho said. "I believe that when the sun shines again for the world, I believe the club and Sonny, they are going to arrive quite easily to a conclusion."

The Korean striker recently changed his representatives to CAA, the same agency that represents Mourinho. CAA also represents teammate Deli Alli and is said to have a good relationship with the Spurs' board.

Mourinho indicated in October that he thinks Son's contract terms should be improved.

"I would love that," Mourinho was quoted as saying by the Daily Mail at the time. "Son has three years of contract so it's not like we're in an extreme situation of everybody being worried. It's more that Son loves it here, I believe that he would like to commit his future to the club for a long time."

With the financial uncertainties created by the coronavirus pandemic and the image issues of a player signing a multi-million pound deal during a time of such economic hardship, Spurs looks set to wait for the summer before finalizing a new deal for Son.