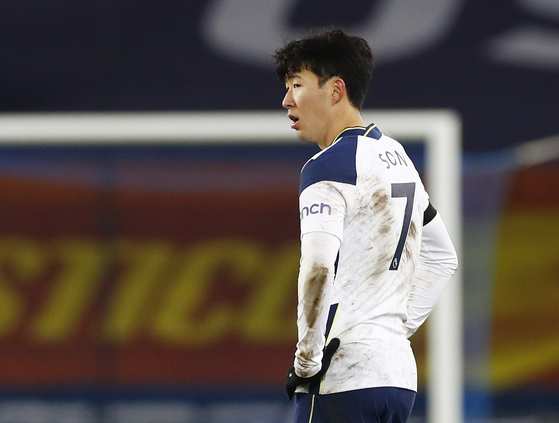 Tottenham Hotspur's Son Heung-min looks dejected at the end of the team's 5-4 loss to Everton at Goodison Park in Liverpool on Wednesday night. [REUTERS/YONHAP]


Tottenham Hotspur failed to advance to the quarter finals of the FA Cup on Wednesday, knocked out by Everton after a bizarre nail-biter with nine goals scored in 120 minutes to allow the Merseyside squad to walk away with a 5-4 win.

Spurs started off strong at the top of the first half, opening the scoring at Goodison Park in Liverpool in just the third minute of the game, with Davinson Sánchez heading home a corner kick from Son Heung-min.

The score remained 1-0 for the next 30 minutes, and for a while it looked like Wednesday's game was going to be a run of the mill midseason FA Cup clash. Then the floodgates opened.

Everton scored an equalizer in the 36th minute, with Dominic Calvert-Lewin smashing a volley past Spurs goalkeeper Hugo Lloris. Two minutes later, Richarlison put the Toffees ahead with a strike from the edge of the box that went through the legs of Toby Alderweireld and into the back of the net.

Everton were now ahead 2-1 in the space of three minutes and they weren't finished yet. Five minutes later, Everton were awarded a penalty for a foul inside the box and Gylfi Sigurosson made it count, taking the score to 3-1 with just minutes left before the end of the half.

Before the whistle blew, Spurs get one back in injury time. Erik Lamela played a quick one-two with Son and then slotted the ball home to take the score to 3-2 going into the break.

Spurs added Harry Kane to the mix at the top of the second half, bringing the captain in off the bench to try and inject some life into the squad. It worked, and Spurs score the equalizer in the 57th minute, with Sánchez capitalizing on a deflected Son corner to take the score to 3-3.

The high-scoring farce continued to unravel over the next 30 minutes, with Richarlison putting Everton ahead again in the 68th minute, before Harry Kane once again tied the score in the 83rd, heading home a well-placed cross from Son.

The score remained 4-4 when the whistle blew, and the teams were forced into extra time. Just a few minutes later, Everton's Bernard Duarte scored the final goal of the match in the 97th minute.

With Spurs unable to reply for the rest of extra time, the game ended after 120 gruelling minutes with Everton up 5-4 to progress to the FA Cup quarterfinals, while Spurs headed back to London with their cup campaign stopped in its tracks.

Spurs coach Jose Mourinho, smarting from conceding five goals for only the third time in his long career, admitted the issue was with his teams defensive, rather than offensive, performance.

"If it hurts me, it hurts everyone from our team, because our feeling is we played really well when we had the ball," Mourinho said. "We were brave, we create, we were the best team while winning 1-0. But in five minutes it was pom-pom-pom, mistake-mistake-mistake, goal-goal-goal."

"Goal-goal-goal" is right — in fact, the Spurs-Everton clash was the highest-scoring FA Cup game between two top-tier teams since 1961.

Despite the loss, Son didn't have a bad game, picking up two assists and directly involved in the two other goals. After the game, BBC Sport gave Son a 5.76 rating for his performance, higher than any other member of the Spurs squad.

Spurs will be back for another tough fixture on Saturday, facing top-ranked Manchester City in a Premier League clash. The game will be broadcast at 2:30 a.m. on Sunday in Korea.