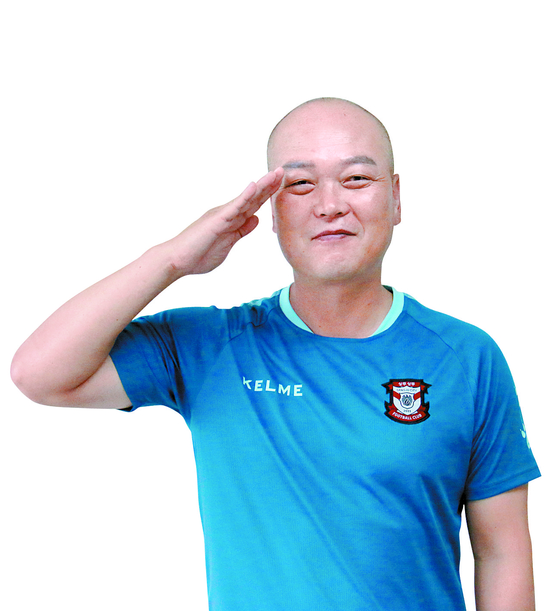 
Korea's military football club will return to the K League 2 this year with a new name, a new home but the same old manager at the helm.

Kim Tae-wan, 50, first joined the military team as a player in 1995, when it was known simply as Sangmu FC. Like all Sangmu players, Kim joined the club for two years while he completed his mandatory military service, an option that allows a select few football players to continue playing throughout their conscription period, without having to join the regular military for more than basic training.

Kim returned as a coach in 2002, when the club became the Gwangju Sangmu Bulsajo FC, and remained with the team as it again changed its name to Gwangju Sangmu FC and then moved to Sangju, North Gyeongsang, becoming the Sangju Sangmu Phoenix FC and later Sangju Sangmu.

Kim took over as manager in 2017. This year, the team moves to Gimcheon, North Gyeongsang, becoming the Gimcheon Sangmu.

The move wasn't Sangmu's choice — its deal with Sangju ended and the city decided not to renew the contract.

"I understand Sangju City’s decision, but it breaks my heart," Kim said. "It is harder to go up from the second division than to stay in the first division."

Next month, 14 players, including Jeonbuk Hyundai striker Cho Gue-sung and Ulsan Hyundai defender Jung Seung-hyun, will join the Army and join Sangmu for their two years of military service.

Other players, like Moon Seon-min, Oh Se-hun and Kwon Kyung-won will be discharged in June.


"Since the service period is reduced, I juggle players every 18 months. While some just sit there and count down the days, some have greatly improved such as Kang Sang-woo [of the Pohang Steelers] and Han Seok-jong [of the Suwon Samsung Bluewings],” said Kim.

As a military squad, Sangmu can only recruit players from the limited pool that enter the military. That creates some unusual issues — this year the team is struggling to strengthen its midfield.


"[I'd really like] Lee Kang-in [of Valencia CF] or Kwon Chang-hoon [of SC Freiburg]," said Kim. "I have high standards. I'm kidding, there's no better player than the whole team. No matter who we get, the will is more important."

Kim, with his shaved head and smiley disposition, doesn't look like a regular military official. And as an officer-slash-football-coach, Kim has an unconventional mission — to keep his players happy.

"We’re a team that parts with players every 18 months," Kim said. "I want players to play football that makes them happy, rather than competitive football like a war."