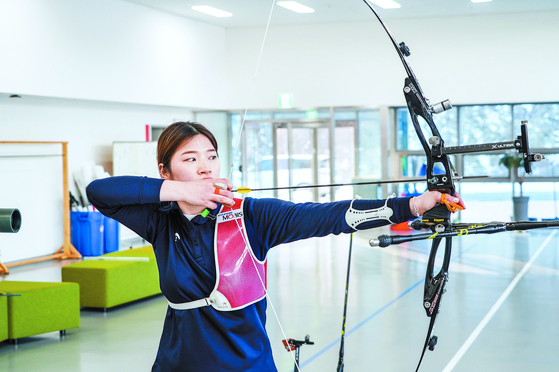 Kang Chae-young is hoping to again qualify for the Tokyo Olympics when the final round of the national qualifiers are held again in March. [KOREA ARCHERY ASSOCIATION]


When it comes to archery, Korea is untouchable.

With 23 Olympic gold medals to its name, Korea is miles ahead of the No. 2 United States, with 14. But with so much success comes high expectations, and every four years Korea is expected to dominate the Games once again. For women's recurve world No. 1 Kang Chae-young, that shot at Olympic glory could be just around the corner.

At 25 years old, Kang's ability is beyond question. As well as being the world No. 1 in her own discipline, Kang won a gold medal at the 2019 Asian Archery Championships and went on to pick up the triple crown in the first round of the World Cup, winning the individual, group and mixed events. She won two gold medals in the second round and in the finals, and won a gold and two silvers at the World Championships.

But as the Olympics are delayed by one year, that trial no longer counts. Kang now has to go through the process again, with the final stage of team qualifications to take place in March.

Park Chae-soon, the national archery team coach, has been training with 16 archers at the Jincheon National Training Center in Jincheon, North Chungcheong, since last December. Last year, when the center was closed due to Covid-19, Kang had to train at her team Hyundai Mobis’ training ground in Yongin, Gyeonggi.

"I've done enough training," Kang told the Joongang Ilbo. "However, it was not easy to maintain my basic physical strength since I wasn’t able to do enough weight training. It’s nice to be back at the [Jincheon] training center, as I can freely use the training ground and the sauna.”

Kang puts more effort into weight training than other archers because her biggest advantage is her power.

Bows are classified based on the tension when the string is pulled back 28 inches. A 44-pound bow means that 44 pounds of tension are needed to pull it 28 inches. Amateurs usually use a 12-pound bow, professional women pull 40 pounds and men 44 pounds.

Kang goes for the full 44 pounds.

The greater the tension of the bow, the greater the power of the arrow and the faster it flies. Arrows must fly faster in order to be less affected by the wind and air friction. In bad weather conditions, Kang has a clear advantage. This also means that she must maintain her strength in order to stay ahead.

But the Olympics still remain elusive for the world No. 1.

During the 2016 Rio Summer Olympics national qualifiers, Kang was pushed back to fourth place on the last day. Jang Hye-jin ended up in third place, going on to become a two-time medalist in Rio.

“It is a sad memory," Kang said. "Honestly, I wasn’t good enough at that time. But my scores got better afterwards. That [experience] was like medicine."

Like she said, Kang became stronger. At the 2017 World Championships after the Rio Olympics, she won two gold medals. In 2018, she qualified for the Jakarta-Palembang Asian Games and won a gold medal in the team contest.

Kang concentrates on training all day, every day, although the atmosphere this year is different from previous years.

"It is harder now than ever before, because the Olympics have not been confirmed," Park said. "We are all focusing on one goal at a time and just getting on with it at this time.”

For Kang, the routine is starting to get monotonous.

“When I was out of the training center, I used to go on trips to get revitalized," said Kang. "I like the sea, so I went there often. But there's nothing else to do now. When I feel like I've been inside the room for too long, I shoot arrows or go on the treadmill.

"At first, I felt tired and lethargic, but after receiving psychological counseling, I’m thinking more positively."

There will be five gold medals up for grabs at the Tokyo Olympics, assuming it goes ahead, with mixed matches added to the men's and women's individual and team matches. Kang could become the first Korean archer to triple at the Olympics.

"I still get nervous whenever I see an article that says the host of the Olympics is unclear," she said. “But I'm doing my best, thinking that it will be held.”