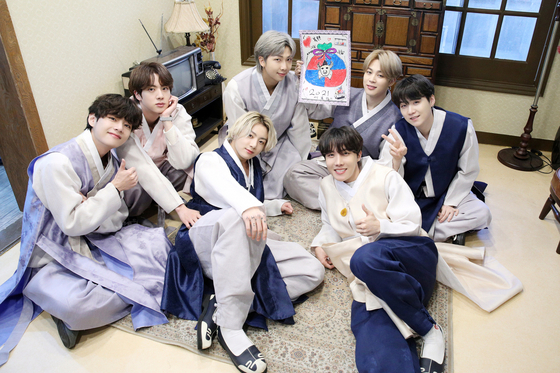 
The music video for BTS's 2017 song “DNA” reached 1.2 billion views on YouTube, a milestone for the group.

Big Hit Entertainment, the group's agency, said last Thursday that views of the official music video for “DNA," the lead single for the band’s fifth EP "Love Yourself: Her," surpassed 1.2 billion. The video reached the 1-billion-view milestone last June.

Meanwhile, the seven members of BTS appeared in hanbok, or Korean traditional dress, in a special video uploaded Wednesday evening on the band’s official channel on YouTube to celebrate the Lunar New Year.

In the video, they make a handmade yeonhajang, a greeting card for the holiday, by hand drawing and painting bokjumeoni, a traditional pouch believed to bring fortune and used for New Year gifts.

After finishing the yeonhajang, they sent out a New Year's message to ARMY, their fan base, saying, "Bokjumeoni filled with our blood, sweat and tears will find its way into the heart of ARMY. Happy new year."