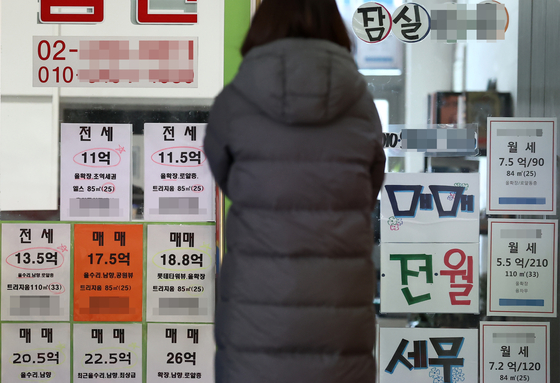 Posting of jeonse offers at a real estate agency in Suoul on Feb. 7. Jeonse prices have gone up due to lack of supply, especially since the Democratic Party pushed through legislation with the intention of protecting tenants. [YONHAP]

The contract is a hybrid between a jeonse long-term deposit and monthly rent. It involves a smaller jeonse and a monthly payment to make up the difference.

The stockbroker was forced out of his old flat when the landlord moved in. While the tenant is entitled to up to four years guaranteed jeonse, a loophole allows for the waiving of that requirement if the owners takes up occupancy.

Because jeonse prices have skyrocketed, the stockbroker had to settle for a half-and-half contract.

“For a person living on monthly paycheck, paying 1 million won on rent every month is difficult,” he said. “However, we decided to live in a half-jeonse after much thought as it is difficult to relocate to another neighborhood because of the kids’ school.”

Half-jeonse contracts have become more popular since the ruling Democratic Party rammed through the three laws designed to protect tenants. They included provisions for automatic extensions and a cap on rent increases.

Those signing half-jeonse contracts are often those who are unable to afford to pay the entire jeonse deposit. Many tenants prefer jeonse, as they don’t have to worry about having to pay additional rent for two years. Landlords prefer half jeonse these days as they can use the monthly rent to pay the increased taxes.

Real estate experts have warned about the possibility of a shrinking jeonse supply, which will result in driving up the prices and increasing the costs for tenants if the government pushes through with its plans of raising taxes on landlords.

According to Seoul city government real estate data, between July 31 last year and January this year, there were 75,684 housing rent contracts including jeonse in Seoul. Among those, nearly 33 percent were half-jeonse contracts.

The hybrid rent contracts especially surged in neighborhoods where there’s a huge demand.

In the case of Seocho District, half-jeonse, which accounted for 35 percent in the first half of last year, has risen to 50.5 percent as of November.   In Songpa, the figure was 27 percent before July. As of November, it rose to 44.3 percent.

The deposit on the half-jeonse for an 84 square-meter apartment at Helio City in Garak-dong, Songpa District, was 100 million won with a 2.5 million won monthly rent. As of January. the monthly rent went up to 3.3 million won.

The situation is the same in Eunpyeong District in northern Seoul.