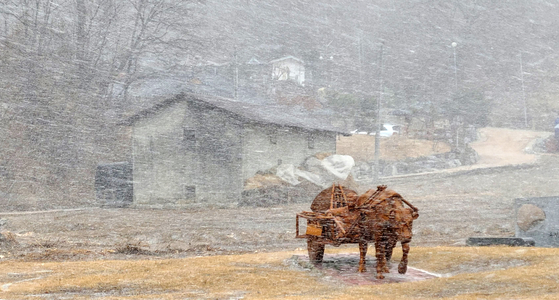 Old Partner Park, built on the filming location of the documentary “Old Partner” (2009) in Bonghwa County, North Gyeongsang. A statue at the center of the park was modeled after the documentary’s protagonist “Grandpa Choi Won-gyun” and his ox Nureongi. [SOHN MIN-HO]


Many Korean moviegoers remember the 2009 documentary “Old Partner.” The film had many in tears with the story of 80-year-old farmer “Grandpa Choi Won-gyun” and his 40-year-old ox. The heartwarming scene still remains like a faded photograph in the remote countryside town of Bonghwa County, North Gyeongsang.

“Old Partner” was filmed at 722, Sangun-myeon, Hanul-ri, Bonghwa County, North Gyeongsang. At the time, it broke the record for the most-watched documentary film in Korean movie history. Twelve years have passed since the movie premiered and although Grandpa Choi, his wife and his beloved ox have all passed, they still remain together as their graves are side by side.

A statue modeled after Grandpa Choi and his ox. [SOHN MIN-HO]


“Old Partner,” directed by Lee Chung-ryoul, was released in theaters on Jan. 15, 2009. It attracted a total audience of three million — a remarkable accomplishment for a documentary, especially at the time — and won awards at numerous international film festivals. The production cost was under 100 million won ($89,000), but the film raked in 1.9 billion won in ticket sales alone; an unprecedented record for a Korean documentary.

The plot of the film is simple. The late Grandpa Choi (1929-2013) and his wife Lee Sam-soon (1938-2019) reside in the countryside village of Bonghwa and farm their plot of land with an old ox. The film ends when the ox dies and although it appears to be a simple story, many found it touching.

“I was born in 1954. My family bought the ox when I was in high school,” said Young-doo. “I remember clearly because since then, I went around cutting straw to feed the ox with my father. I don’t know its exact age but it lived around 40 years.”


The limping man and the sluggish ox 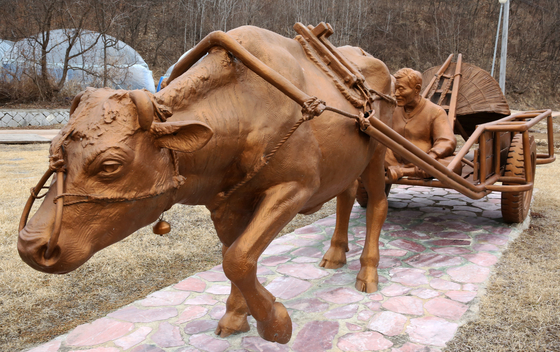 The statue of Grandpa Choi and his ox at Old Partner Park. [SOHN MIN-HO]


How did director Lee find a 40-year-old ox living in the depths of the Gyeongsang countryside? Lee had been searching for a particular ox since 2000; not an ox raised in a cattle shed, but one that actually ploughed farmland. “I wanted to talk about fathers through hard-working oxen,” said Lee.

Three people contacted Lee after he posted a message on the National Livestock Cooperative Federation’s website. Other oxen did not fit the bill, and the last candidate was Grandpa Choi’s Nureongi. One winter day in 2004, Lee sensed a fateful encounter when he saw Grandpa Choi and his ox coming back home side by side. 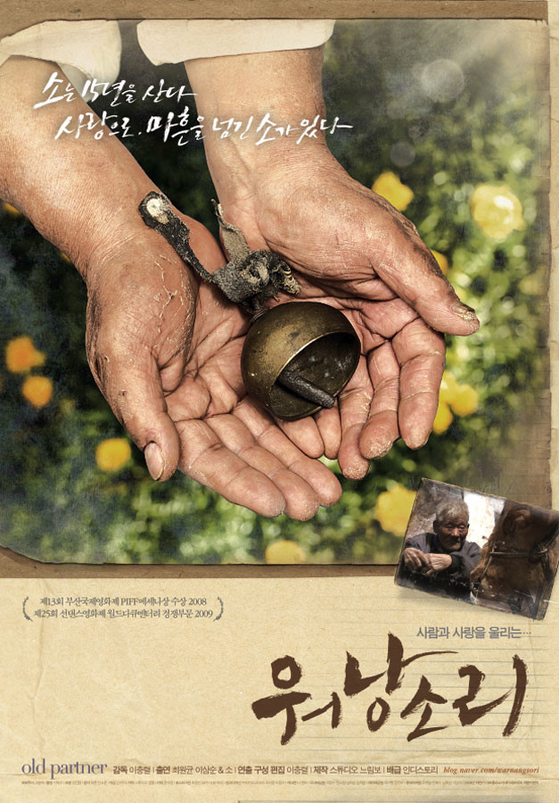 
The fact they were “side by side” was striking to Lee. Grandpa Choi was walking alongside the ox, not on a wagon pulled by it. Grandpa Choi was limping because of a problem he had with his leg, and the ox was walking sluggishly due to its old age. Along they went, side by side. “Old Partner” is not about humans and livestock; it’s about two lives and how they intersect.

Grandpa Choi had poor hearing but easily recognized the sound of Nureongi’s cowbell. He loved eating meat, but never ate beef. Whenever Grandpa Choi fell asleep on the wagon, Nureongi pulled him home. Even on the day Nureongi died, the ox brought home a load of firewood. Grandpa Choi cut fresh straw every day to feed the ox, and refused to spray pesticides on his red pepper field because the pepper stems were for the ox to eat.

“It’s so frustrating. He can just buy cattle feed but he doesn’t. We have to chop up straw every day to feed the ox. What is my life!” Grandpa Choi’s wife complained every day. 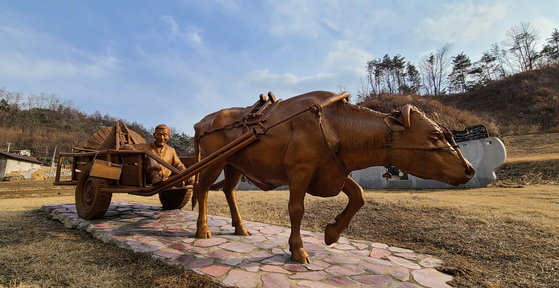 
Ten minutes away by car from Bonghwa County’s downtown, Old Partner Park stands near the entrance of Grandpa Choi’s former house. The documentary instantly attracted a wave of tourists when it was released, and a surprised Bonghwa County office built the park spending some 587 million won.

At the center of the park stands a statue of the ox, pulling a wagon that Grandpa Choi is sitting on. The boney ox and slouching but smiling Grandpa Choi are exactly like a scene from the film. A beat-up radio from the movie is also depicted in the statue.

“Tourists were swarming in when the movie was released, but hardly anyone visits nowadays,” said the head of Bonghwa County’s Culture and Tourism Division, Kim Gyu-ha.

Grandpa Choi and his wife Lee Sam-soon are buried next to each other. The ox is buried near them. The plot of land behind the graves is the red pepper field featured in the documentary. [SOHN MIN-HO]


Nureongi died in the early winter of 2008. Grandpa Choi passed away in the summer of 2013, followed by his wife in the early summer of 2019. The three were finally reunited one-by-one after being separated by death. A two-minute drive away from Old Partner Park is where Grandpa Choi, his wife, and his ox have been laid to rest.

The red pepper field from the movie is behind the graves, and the rice field below the graves is where Grandpa Choi and his ox farmed. The dirt road between the graves and the main road is where the old ox sluggishly pulled Grandpa Choi’s wagon.

The house Grandpa Choi used to live in. The house burned down in 2019 and no traces of it remain. Now his eldest son Young-doo, a painter, lives there alone. [SOHN MIN-HO]


No trace of the house Grandpa Choi used to live in remains. After his wife died in June 2019, the house caught fire and burned down. Now, his eldest son Young-doo lives in a container house where the old house once stood. Sculptures made by Young-doo, a retired art teacher-turned-painter, are scattered across the yard.

“There were some unexpected problems after the movie was released,” said Young-doo. “People started walking into my parent’s yard all the time. Some people blamed them for making that old ox work until it died. Some blamed us, that my parents had nine children and all of us neglected them. Still, it was a good thing that my father and mother appeared in the movie. I’m thankful that the world now recognizes how hard they worked all their lives, and as a son, I’m grateful that I can see them anytime again through that documentary.” 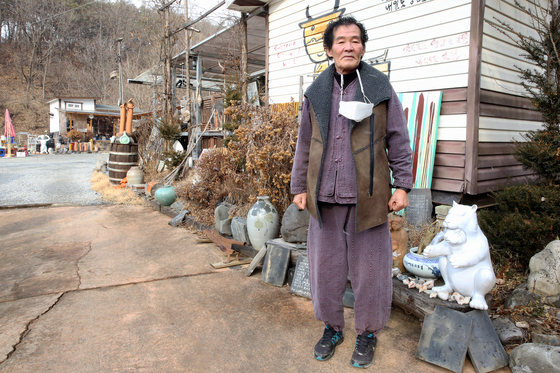 
The English title of the documentary is “Old Partner,” while the literal translation of its Korean title is “cowbell sound.” The Korean title conveys a longing for one’s hometown, and the English title makes people think of their fathers who worked until they grew old. In the Year of the Ox, take particular care of your father.