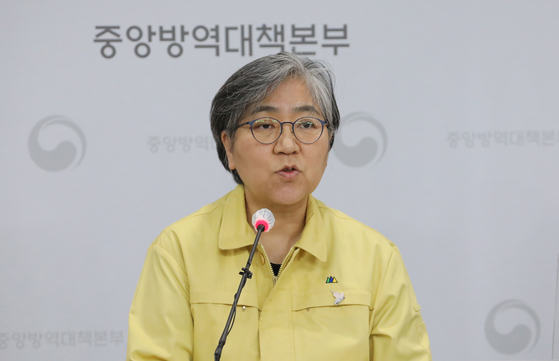 Korea Disease Control and Prevention Agency (KDCA) Commissioner Jeong Eun-kyeong announces that some 272,000 people under the age of 65 residing in nursing homes and other high-risk facilities are set to be the first to be vaccinated in the country with AstraZeneca’s Covid-19 vaccine starting Feb. 26 in a press briefing Monday at the KDCA headquarters in Cheongju, North Chungcheong. [NEWS1]

Some 272,000 people under the age of 65 in nursing homes and other high-risk facilities will be the first to be vaccinated in Korea starting Feb. 26.

The Korea Disease Control and Prevention Agency (KDCA) Monday afternoon revealed details of the first stage of its plan to inoculate some 760,000 people in high-risk facilities and Covid-19 medical workers in February and March. The KDCA is holding off the inoculation of people 65 or older with the first vaccine to be used, made by AstraZeneca.

According to the plan, over 272,000 residents and staff under the age of 65 in nursing homes, psychiatric hospitals and other long-term care facilities will get the first shots of the AstraZeneca vaccine. That's about 42 percent of a total of 649,000 older people living in high-risk facilities designated by the KDCA as a priority group for vaccination.

The vaccination of some 377,000 people aged 65 and older at these high-risk facilities will be postponed until additional clinical data is available next month about the effectiveness of the AstraZeneca vaccine in the elderly.

The first batch of AstraZeneca vaccines, enough to inoculate 750,000 people, is expected to be delivered between Feb. 24 and 28.

The vaccine is manufactured locally at an SK Bioscience factory in Andong, North Gyeongsang.

There have been concerns about the vaccine, developed by the British-Swedish pharmaceutical giant and Oxford University, being less effective in people 65 and over and showing poor initial results in fighting off the South African variant of Covid-19.

Last week, the Korean Ministry of Food and Drug Safety authorized the use of the AstraZeneca vaccine for all adults, including people 65 and older, on the condition that the drug company submits further data from ongoing phase three clinical trials.

The ministry determined that the vaccine was safe to use even for the elderly population but advised that physicians should “be attentive when administering to individuals aged 65 and older,” because of limited clinical data available for that age group.

AstraZeneca is expected to submit the results of ongoing phase three clinical trials in the United States around the end of March, expected to address the efficacy of the vaccine on older people.

Some 354,000 medical workers at general hospitals treating Covid-19 patients will be inoculated with the AstraZeneca vaccine starting March 8, according to the KDCA.

Vaccinations of some 78,000 other Covid-19 workers including paramedics and quarantine and epidemiological officials will kick off on March 22.

Inoculations are expected to be offered at the nursing homes, medical institutions and public health centers. A health care team will visit facilities without physicians to offer shots. Registration for vaccination has already kicked off or will begin soon according to each category. 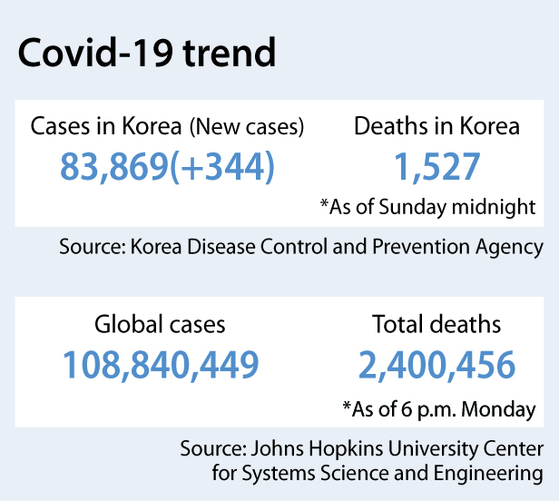 Simultaneously, the Pfizer vaccine is expected to be delivered through the Covax Facility mechanism in late February or early March and is expected to inoculate some 55,000 frontline medical professionals treating Covid-19 patients. The Pfizer vaccine requires tricky ultra-cold chain storage, unlike the AstraZeneca doses, which can be stored and transferred at normal refrigerator temperatures between 2 to 8 degrees Celsius (35.6 to 46.4 degrees Fahrenheit).

“The safety of [the vaccine] has been confirmed even in the 65 and over age group, and the triggering of an immune response has been confirmed,” said KDCA Commissioner Jeong Eun-kyeong said in a press briefing Monday. “However, since the number of clinical trial participants 65 years and over was small, the number of infected people in the vaccine group and control group was very small, so there was a limit to drawing statistical evidence for effectiveness. Taking this into consideration, after further effectiveness is confirmed, we will adopt a plan for those 65 and older.”

She said the 65 and older group is expected to be vaccinated by the second quarter at the latest.

The Korean government initially planned to inoculate 780,000 elderly people and workers in nursing homes and other high-risk facilities in the first quarter of the year.

The AstraZeneca vaccine has been granted marketing authorization or emergency use in some 50 countries, including Britain, with clinical studies showing that it is effective in preventing severe disease, hospitalization and death.

Jeong said, “In order to protect high-risk groups through vaccinations and to form herd immunity to overcome Covid-19, we ask those who are in the inoculation groups actively participate in vaccination.”

The KDCA said it doesn’t expect any setbacks to its goal of achieving herd immunity in Korea by November.

A second round of vaccinations will take place over April and May.

Covid-19 cases remained in the 300s for the third consecutive day, as the government eased social distancing measures nationwide.

Korea reported 344 new Covid-19 cases, including 323 local infections, as of Sunday midnight, according to the Korea Disease Control and Prevention Agency (KDCA) Monday. This brings total cases to 83,869.

Of 21 imported cases, five were from the United States, six from Europe and three from Africa.

Starting Monday, social distancing measures were lowered a notch from Level 2.5 to Level 2, the third highest in a five-tier system, in the greater Seoul area and from Level 2 to Level 1.5 for other regions. The measures run through at least Feb. 28.

A 9 p.m. curfew on restaurants, cafes and indoor fitness centers in the greater Seoul area was extended to 10 p.m. and lifted entirely in regions outside of greater Seoul. Restrictions on operating hours of many businesses such as movie theaters, internet cafes, cram schools, big supermarkets and amusement parks nationwide were completely lifted. Nighttime entertainment facilities such as clubs, bars and room salons that have been banned from operating will be allowed to operate until 10 p.m. nationwide. 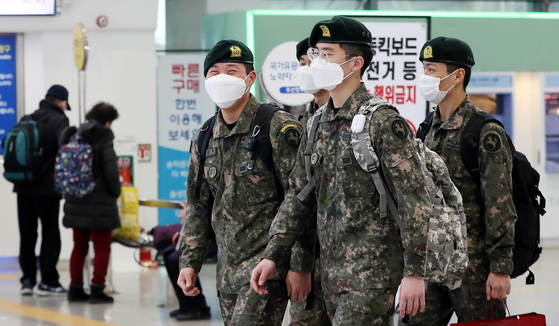 Soldiers flock to Seoul Station Monday to head home for the first time in two months after the Defense Ministry lifted a ban on troops taking leave due to eased social distancing regulations. [NEWS1]

The Defense Ministry Monday allowed enlisted soldiers to take time off for the first time in two months due to eased social distancing regulations.

Health authorities warned not to let down guard as infections could have spread over the Lunar New Year holiday as people traveled across regions to their hometowns.

Most of the local Covid-19 transmissions were concentrated in the metropolitan area, with 147 in Seoul, 99 in Gyeonggi and nine in Incheon.

Police on Monday raided the headquarters of International Mission (IM), a Korea-based Christian missionary group that runs international schools and churches nationwide, over suspected violations of social distancing regulations that led to over 400 cases.

The Seoul Metropolitan Government on Monday also confirmed that a pet cat living with a family infected with Covid-19 tested positive for the virus the previous day, the first such case confirmed in the city.