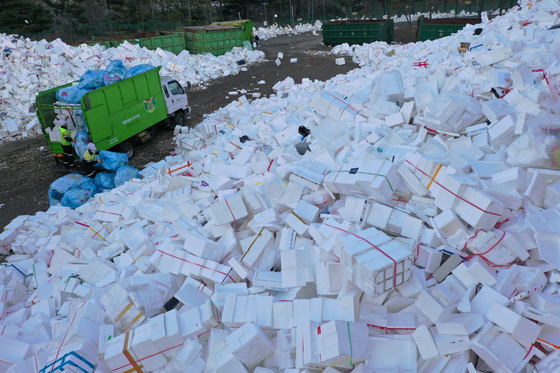 At a recycling center in Suwon, Gyeonggi, on Monday, workers sort out Styrofoam boxes which were used in gift sets for the Lunar New Year holidays and dumped after use. [YONHAP]


Plastic food containers, remnants of the ever-increasing demand for food delivery services due to social distancing restrictions, make up a large chunk of Covid trash. Disposing of these articles is not just a matter of burying or burning — this trash will hang around for the next 500 years.

According to the Ministry of Environment, food delivery in 2020 increased 76.8 percent compared to 2019. In 2020, discarded plastic waste averaged 848 tons per day, which has increased 15.6 percent year-on-year.

At a mixed plastic recycling screening center in Gyeonggi, a screening field connected to a conveyor belt runs nonstop. Plastic sped through the conveyor at a speed of 2 to 3 meters (6 to 10 feet) per second. Around the 25-meter mark, 11 employees stood and picked out the plastic to sort it individually.

As of late, employees onsite have been getting off work later than usual.

"As the amount of trash increased, I can’t concentrate on what people say next to me,” shouted Lee Jung-soon, 72.

Some workers were hurriedly picking out four to five plastic items in front of them at a time. Na Sang-ho selected six plastics in five seconds.

"We have been in a state of emergency since Covid-19. I haven't had a day off,” said Ahn So-yeon, CEO of Recycling Screening Center. "I'm risking my life doing this work because there will be chaos when we stop."

Workers in the screening area are having trouble dealing with all the Covid-19 trash, blaming the extra work on a surge in delivery containers. "Since the beginning of the Covid-19 pandemic, the number of personnel has decreased, but the amount of trash has increased.

"The screening efficiency is much lower than before,” said Ahn. "Recyclable things also often get thrown away as regular trash," she said.

Delivery containers are not easy to recycle even if consumers wash, wipe and separate them. This is because food scraps that are not easily washed away remain or because the containers are made of a mixed plastic material.

"There is no recycling process for disposable delivery containers, so we can say that they go to the incinerator as-is,” said Lee Dong-hak, head of the Garbage Center. "They are all mixed with other plastics, so it's a bothersome task. But we have to do our best to wash and separate as much as we can for now."

Ahn also mentioned plastic straws and cups. "Straws are made by integrating plastic materials, but we have to throw them away because they are all made differently," said Ahn. "Producers should decide on one material.”

Separation of recyclable products should be functional, but the separation guidelines these days often do not correlate with how they are produced.

In September 2020, the Ministry of Environment put out a notice describing items that are likely to be miscategorized when separating recyclables and regular trash. However, many citizens were angry, claiming “the government doesn't give exact standards of recycling.”

"Consumers should throw away non-recyclable products as garbage instead of separately discharging them, and companies should make easily recyclable from the production stage," said Hong Soo-yeol, head of the Institute for Resource Circulation and Social Economics.

"There is confusion because the content changes depending on the needs, and the information goes around without an explanation of why. We need to create an online system that can comprehensively show the standards for waste separation,” he added.