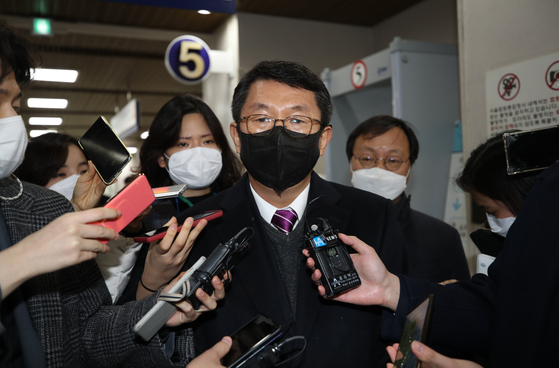 Kim Seok-kyun, former chief of the Korea Coast Guard, leaves the Seoul Central District Court on Monday after he was acquitted of negligent homicide in the 2014 Sewol ferry's sinking. [YONHAP]


A local court on Monday acquitted Kim Seok-kyun, former chief of the Korea Coast Guard, of negligent homicide in the 2014 Sewol ferry sinking, which left 304 passengers dead or missing.

The Seoul Central District Court on Monday found Kim not guilty of negligent homicide after the prosecution charged him of botching the rescue operations in Korea's worst maritime disaster. Nine other former and current workers of the Korea Coast Guard, also indicted of negligent homicide, were acquitted.

Kim and other Coast Guard workers were indicted February last year for failing in the rescue operation when the Sewol ferry sank on April 16, 2014. Three-hundred and four were declared dead or remain missing, while another 142 were injured.

During the trial, prosecutors argued that Kim should have taken hold of the situation more quickly and accurately and commanded the Coast Guard to rescue the passengers from the sinking ferry, but failed to do so. The prosecutors said the rescue team's entry to the ferry was delayed due to his negligence and requested the court punish him with five years behind bars.

Kim has apologized for the casualties, but argued for his innocence. He said there is no correct answer for a rescue operation.

The court on Monday ruled that the Coast Guard leadership did not have enough information to issue an evacuation order to the passengers in the early stage of the sinking. The Coast Guard also had no way of knowing that the ferry's captain and crew would abandon the passengers without helping with their evacuation, the court said.

During the early hours of the accident, the ferry's captain and crew transmitted an incorrect message to the maritime authority that they had broadcast an announcement saying that passengers must evacuate. They then left the sinking ship while many passengers remained inside. Survivors later said the crew told them to stay put, depriving them of an opportunity to evacuate the ship.

As the ship capsized, most passengers remained inside. Only those who climbed to the top of the ship or jumped into the water were rescued.

The victims' families expressed their rage toward the court after the acquittal was announced. The prosecution said it will appeal. 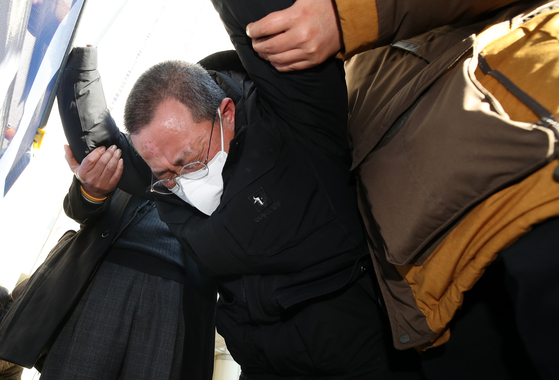 Yoo Gyeong-geun, who represents families of the victims in the Sewol ferry sinking, wails on Monday after the Seoul Central District Court acquitted Kim Seok-kyun, chief of the Korea Coast Guard at the time, of negligent homicide in the 2014 Sewol ferry’s sinking. [NEWS1]

Meanwhile, the court on Monday convicted two other Coast Guard workers including Kim Mun-hong, who was the chief of the Coast Guard's Mokpo Branch during the time of the accident, of falsifying internal documents to say that they had issued an evacuation order to the ferry passengers at the early stage of the sinking. They were given suspended prison terms for the forgery.

Following the ferry's sinking, a series of investigations took place to uncover the reasons for the accident, the abysmal rescue operations, the poor government response and the subsequent cover-up attempts. The prosecution's latest investigation was the eighth of its kind.

The outcome of the most recent probe was announced last month. A special team of prosecutors probed a slew of allegations surrounding the Sewol ferry, including suspicions that the former Park Geun-hye administration had pressed the prosecution and the Board of Audit and Inspection to influence the probes. The suspicion that the National Intelligence Service had illegally surveilled families of the victims was also investigated.

The special investigation team, however, cleared all the charges. "The victim's families would be disappointed, but we cannot trump up charges," Lim Gwan-hyeok, head of the team, said. "We did everything allowed by law and principle."

A new probe by an independent council will soon take place, according to a law passed by the ruling Democratic Party at the end of last year. It will be the ninth investigation into the tragedy.