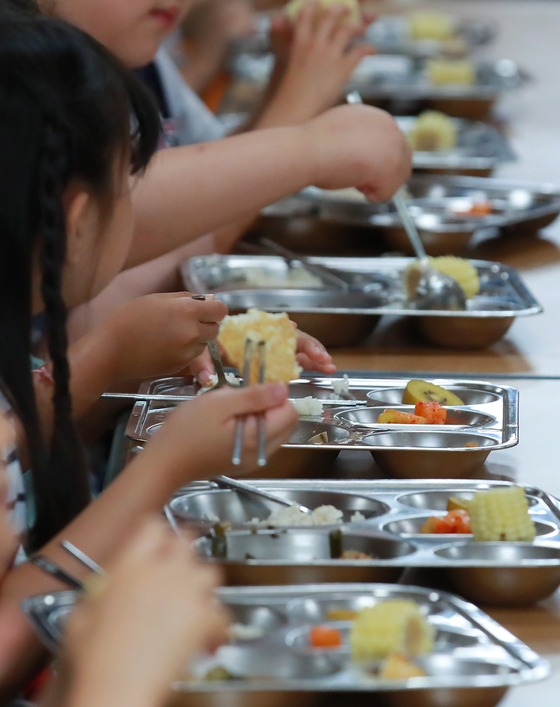 Students of an elementary school in Seoul eating their lunch on July 8, 2019. [YONHAP]

Seoul city government is expanding its free school lunches for all grades in elementary, middle and high schools starting this spring.

“Starting this year, all grades in elementary, middle and high schools in Seoul will receive free lunches at school,” said acting Seoul Mayor Seo Jung-hyup in a statement Monday. “The free-lunch initiative that began 10 years ago at the city government is finally coming to fruition.”

In 2011, the city government began offering free lunches to students across all public elementary schools in Seoul. The program was expanded to cover all types of elementary and middle schools in the city from 2012 to 2014, and to all high school students except the first-year students from 2019 to 2020.

The first-year students in high schools will be included in the program starting this spring, the city government said.

According to the city government, a total of 1,348 schools in the city, including public and private schools, and its 835,000 students will be provided with free lunches.

This year alone, the city estimates the free lunch program to cost a total of 727.1 billion won ($660 million). The city government will be covering 30 percent of it, local district offices 20 percent and the local education offices 50 percent.

Free lunch for all students in elementary, middle and high schools was a controversial initiative when it was first put forward in 2011, when Oh Se-hoon was the city mayor.

Oh opposed the initiative, calling it a populist policy, and vowed to quit if voters did not side with him on a referendum to decide on the issue. The referendum asked voters if they would like to reduce the scope of the city’s free school lunch program supported by the Seoul Metropolitan Council at the time.

The referendum failed to garner the minimum one-third turnout, invalidating the vote.

Oh stepped down from office, setting the stage for the city’s first mayoral by-election. Park Won-soon was elected in the by-election, becoming the longest-sitting mayor of the city after he was elected a third and final time in 2018.

Park committed suicide last year after his former secretary reported him to the police for sexual harassment.

Oh is running for a spot in the mayoral by-election slated for this April, joined by others including former Minister of SMEs and Startups Park Young-sun, ruling Democratic Party Rep. Woo Sang-ho, head of minor opposition People’s Party Ahn Cheol-soo and former lawmaker of opposition People Power Party Na Kyung-won.