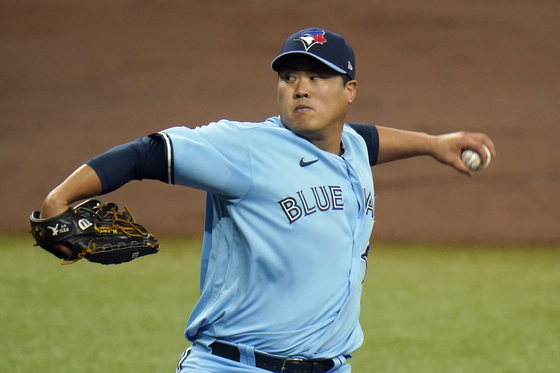 Ryu Hyun-Jin of the Toronto Blue Jays pitches to the Tampa Bay Rays during the first inning of Game 2 of the MLB Wild Card series on Sept. 30, 2020. [AP/YONHAP]

The MLB announced this year’s regular season schedule on Feb. 12. Although the 2020 season was shortened to 60 games due to the Covid-19 pandemic, this year will see the return of a full 162-game regular season.

The Blue Jays will begin their campaign with an away series against the Yankees on April 2. The team's ace Ryu, who started in the opening game last year, is expecting to return for this year’s opener.

For years, Ryu seemed to struggle whenever he had to face off against the Yankees. He never won a victory when he was playing with the Los Angeles Dodgers, and allowed three home runs in his first game after moving to the Blue Jays. However, on Sep. 25 last year, Ryu finally seemed to break the curse, pitching seven scoreless innings to pick up his first win against the New York club.

Kim Kwang-hyun's St. Louis Cardinals will start their season against the Cincinnati Reds, although it is not entirely clear if he'll play or not.

Last year, Kim played in eight games with three wins, no losses, one save and a 1.62 ERA. If Kim remains a starter this year, he is likely to start in third or fourth in the rotation. If Kim does not play against Cincinnati, he will likely make his first appearance against the Miami Marlins on March 6.

Choi Ji-man's Tampa Bay Rays will face the Marlins away, while Kim Ha-seong's San Diego Padres will play their opening series against the Arizona Diamondbacks at home.