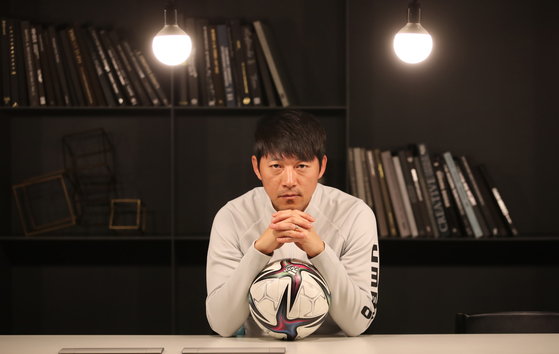 Kim Nam-il, manager of Seongnam FC, poses for a photo during an interview with the JoongAng Ilbo on Feb. 4. [JOONGANG ILBO]


Kim Nam-il, the second-year manager of Seongnam FC, is determined the Gyeonggi club will come back stronger this season, after a difficult start last year.

The 2020 season, Kim's first as a manager, was a bit of a rollercoaster.

Everything started well, as Seongnam recorded no losses for four consecutive games after the opening game, with Kim even selected as the K League's "Manager of May" in his first month.

Despite the strong start, Seongnam plummeted to 10th in the 12-team league, narrowly avoiding relegation.

"I was full of motivation and confidence, but the reality was different," Kim said. "Luckily, we were able to survive the last game by showing the power of the team playing as one."

Kim was in tears when Seongnam picked up their final victory to avoid relegation — a rare show of emotion for the former charismatic midfielder of the 2002 Korea-Japan World Cup.

"Despite how I look, I have a lot of tears," Kim said. "The hard time with the players went through my head like a film at that time and made me burst into tears.

"My life hasn't been smooth. After joining Russia's Tom Tomsk in 2010, I lived a life where it felt like all I ever saw was snow. Last year was so tough that even those times are incomparable."

Last year, Kim raised Hong Si-hoo, a 20-year-old high school graduate, from an unknown player to a star footballer. Hong scored one goal and one assist in the team's final K League 1 game against Busan I-Park, saving Seongnam from relegation.

There are many changes to Seongnam this year. Key player Na Sang-ho left for FC Seoul and Yeon Je-woon and Yu In-soo joined the army. Instead, strikers Fejsal Mulic from Serbia, Sergiu Bus from Romania and Park Yong-ji, as well as defender Richard Windbichler from Austria, signed with the club.

Kim isn't the only hero of the 2002 World Cup to return to the K League this year, with Hong Myung-bo, manager of Ulsan Hyundai FC, Lee Young-pyo, CEO of Gangwon FC, and Korean footballing royalty Park Ji-sung, advisor at Jeonbuk Hyundai Motors, also joining the league.

"Lee seems to be communicating with coach Kim Byung-soo and organizing the team well," said Kim. "The quality of the K-League has increased with Park's addition, and so has the attention.

"Hong is someone I want to resemble as a soccer player and also as a man. I often received advice and encouragement from him when I was undergoing a difficult time last year. I'm looking forward to what kind of soccer he will show this year, and I want to play a great match against his team. Of course, we will not lose."