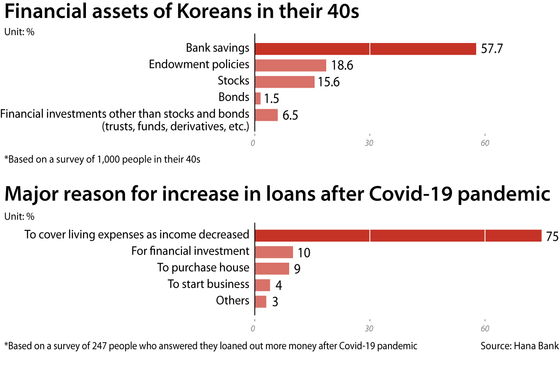 
Hana Bank's survey on Koreans in their 40s showed 78 percent of them have experience with financial investment and most of those investing are planning to expand their holdings.

The bank surveyed 1,000 people in their 40s, a major age group for the country's economy, and released the results Tuesday.

According to the survey, 78.2 percent of the respondents were already investing in stocks, bonds or other kinds of financial assets, including trusts and funds.

Of those who were investing, 57.4 percent said they have plans to expand their investments.

Among those investing, 38 percent said their risk tolerance level changed recently, with 26 percent saying they have become risk takers.

The interest rate in Korea has been maintained at a record low rate of 0.5 percent since May last year as inflation remained low and the pandemic continued. Thanks to the abundant liquidity, funds flew into the local stock market, boosting the main index to over 3,200-mark for the first time in history earlier this year. The explosive growth led many retail investors to more aggressively jump into stocks.


Among the assets, financial assets amounted to 70 million won on average.

Slightly more than half of the 1,000 respondents said they have taken out house-related loans, while 21.5 percent of them said they have repaid their loans.

While 65.9 percent of the respondents had debt, including mortgages and unsecured loans, 37.5 percent of them said they borrowed more after the spread of Covid-19.

They mostly borrowed more to cover living expenses as their income shrank after the pandemic started. Some said they borrowed to invest in stocks and purchase houses.