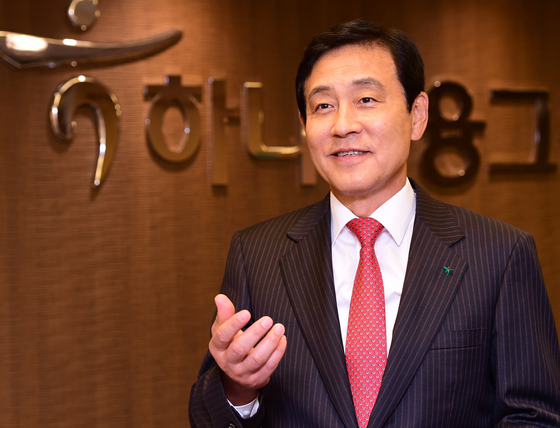 Hana Financial Group Chairman Kim Jung-tai may serve another term, as he has been included in the shortlist of four candidates for the chairman post.

The group's chairman recommendation committee said in statement that it included candidates that "would support organizational stability at Hana Financial Group."

Most other financial companies have extended terms of existing heads considering the uncertainties in the market spurred by the Covid-19.

The committee added that the candidates were selected based on their mid to long-term business strategies, entrepreneurship, expertise, past experience and global mindset.

Kim, who has been serving as chairman of the financial group since 2012, had said he won't be serving another term, which would be his fourth. He is also 69 years old this year, which means even if he is re-elected chairman, he will only be able to serve one year. The group has an age limit of 70 years old for the chairman post.

However, with Kim still included in the shortlist, eyes are on whether the group will have him serve another year to maintain stability in the group for the time being.

Ham was originally cited a strong candidate to become the next chairman. However, he is still on trial for alleged involvement in hiring-related scandal. He was also reprimanded last year by the country's financial regulators for selling high-risk derivative-linked funds to clients without properly informing them about the dangers.

Hana Financial Group's committee will announce its final candidate soon after holding interviews, it said. The announcement is likely to be made by next week.