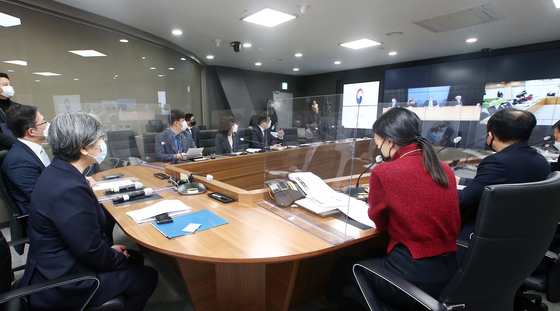 On Tuesday, the Korean company signed a licensing deal with American bio firm Novavax for its NVX-CoV2373 coronavirus vaccine. SK Bioscience has exclusive rights to manufacture, gain approval and sell the vaccines in Korea. The value of the deal was not disclosed.

Under the licensing deal, SK Bioscience will deal directly with Korean authorities for domestic vaccine supplies. All other vaccine suppliers to Korea have been multinational companies or organizations.

On Tuesday, SK Bioscience signed an agreement with the Korea Disease Control and Prevention Agency to provide 40 million doses of NVX-CoV2373, enough for 20 million people.

SK Bioscience said in a Tuesday statement that it would be able to "immediately embark on producing the contracted volume," as Novavax had already completed the technology transfer for NVX-CoV2373's protein antigen and other manufacturing technology after the signing of the production agreement last August.

"The significance of this deal lies in the fact that it goes beyond a simple purchase agreement," said Ahn Jae-yong, SK Bioscience's chief executive in a Korean statement. "What we acquired is the technology itself and on a national level, that gives us the independence to overcome this pandemic on our own."

Novavax's NVX-CoV2373 is a viral vector vaccine made with technology used in vaccines for influenza, hepatitis B and cervical cancer.

It can be stored in normal refrigerators at 2 to 8 degrees Celsius. Vaccines from Moderna and Pfizer, which use mRNA technology, require extremely low temperature to remain effective.

NVX-CoV2373 is nearing completion of a final round of clinical trials in the United States, according to the Financial Times Monday, which said the vaccine candidate could be the "fourth to receive an emergency use authorization in the U.S. for Covid-19."

"SK Bioscience shares our sense of urgency to deliver a safe and effective Covid-19 vaccine to protect the global population, including the people of South Korea," said Stanley C. Erck, Novavax's president and CEO.

"We are proud to expand our partnership, which is another great milestone for both companies toward increasing the supply of NVX-CoV2373."

For SK Bioscience, the licensing agreement is the latest in a range of projects related to Covid-19 vaccines.

British bio firm AstraZeneca signed a deal with it last July, before Novavax, to produce its Covid-19 vaccine. Apart from the manufacturing deals, SK is developing two Covid-19 vaccine candidates of its own, one of which, GBP510, was funded by the Bill & Melinda Gates Foundation. Both are undergoing early-phase clinical trials in Korea.

To fund these projects, SK Bioscience is preparing an initial public offering. It will be listed on the Kospi stock market next month.