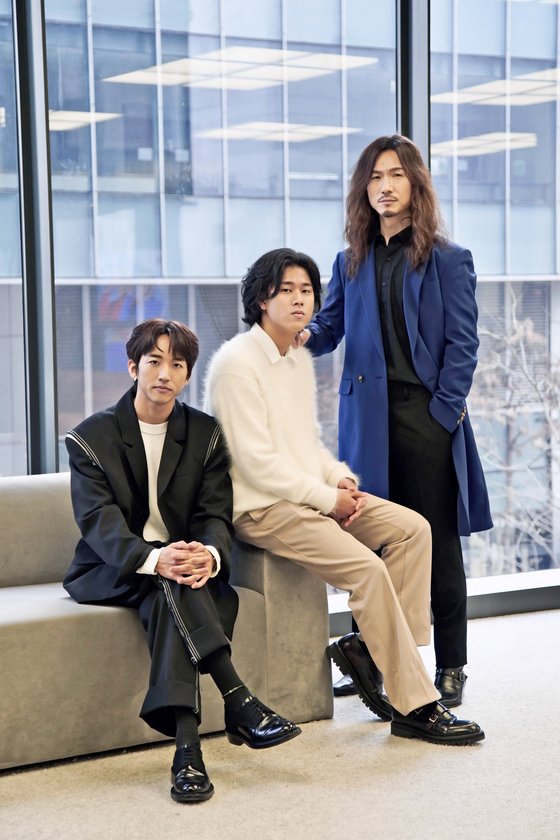 
“Being an artist is good. But we have to survive every day.”

Fifty-year-old singer Yoon Young-ah introduced herself as the “female Yang Joon-il” when she first stepped on the stage of cable channel JTBC’s audition-slash-competition show “Sing Again” as Singer No. 50. She thanked the program for allowing her to sing once again after she had taken years away from the stage. Though she did not make it to the final, she did indeed “Sing Again” and introduced herself as a singer in a way she hadn’t been able to before.

The program allowed Yoon and 70 other singers who had been out of the spotlight for years, a second chance at success. During an online press conference held Tuesday after the final episode of the show aired on Monday night, the final three contestants – Lee Seung-yoon, Jeong Hong-il and Lee Mu-jin – once again thanked the program for the new chapter in their careers, perhaps their second debut.

“I’m dazed with all the love and attention that I’ve gotten and I think it’s going to take time to get used to it,” said Jeong. He debuted in 1998 as a member of heavy metal rock band Barkhouse and started off the show as Singer No. 29. “I’m thinking about everything that I need to do from now on while I get used to all this joy and concern for the future.” 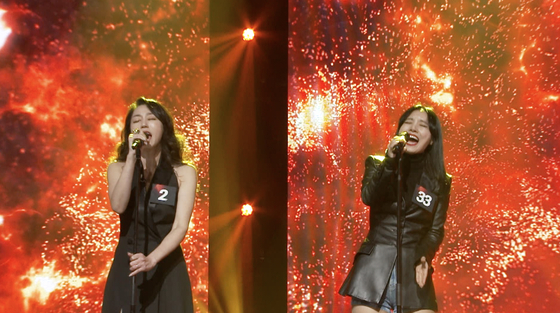 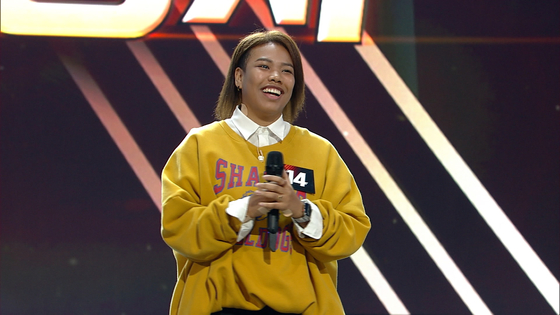 A captured scene from ″Sing Again″ of Singer No. 14, or singer Lee Michelle, who scored high on the SBS audition program ″Kpop Star″ in 2011. [JTBC] 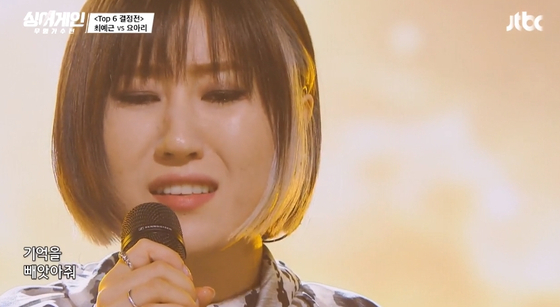 
“Sing Again” started in November last year with the format of a music audition program, but added a unique twist by only casting singers that had at least one song or album officially released in the music market. Initially, competitors were only referred to by a number in a bid to keep their identities concealed, but when the top 10 contestants were chosen last month their names were revealed.

Viewership ratings soared from 3.2 percent on Nov. 16, to 10.1 percent by its 11th episode on Jan. 1. Its success can be partly attributed to offering viewers a break from the flood of trot-or-idol music programs and also the sense of nostalgia the show provides when contestants perform long-forgotten songs.

Six singers went head-to-head in the final round on Feb. 8: Singer No. 1 Lee So-jung, who debuted in 2013 as part of girl group Ladies’ Code; Singer No. 20 Lee Jung-kwon, who rocked the KBS1 talent show “Korea Sings (National Singing Contest)” in 2015 with singer San-Eh Kang’s “Like The Mighty Salmon Swimming Upstream" (1998); Singer No. 29 Jeong; Singer No. 30 Lee Seung-yoon; Singer No. 47, known by her stage name Yoari, who debuted in 2007 as the vocalist of band Sprinkler; and Singer No. 63 Lee Mu-jin.

Jeong showed off his rock spirit which he smoothly mixed into a pop style to meet the contemporary trend, while the two Lees both wowed viewers — Lee Seung-yoon for his adaptation of Lee Hyori’s “Chitty Chitty Bang Bang” (2011) and Lee Mu-jin for his adaptation of Han Young-ae’s 1988 hit “Hello.” The video of Lee Mu-jin's performance uploaded on JTBC’s YouTube channel has surpassed 14 million views as of Tuesday.

“'Sing Again’ has been a turning point in my life,” said Lee Mu-jin, “but I haven’t been outside the house much since [I started shooting]. My mom has been making nicer food for me and worries about me less, but that’s the only way I’m feeling the change (laughs).”

Even though the coronavirus keeps them from meeting their new fans in person, the three singers say that the comments and letters they have received have given them energy “to try harder” according to Lee Mu-jin. 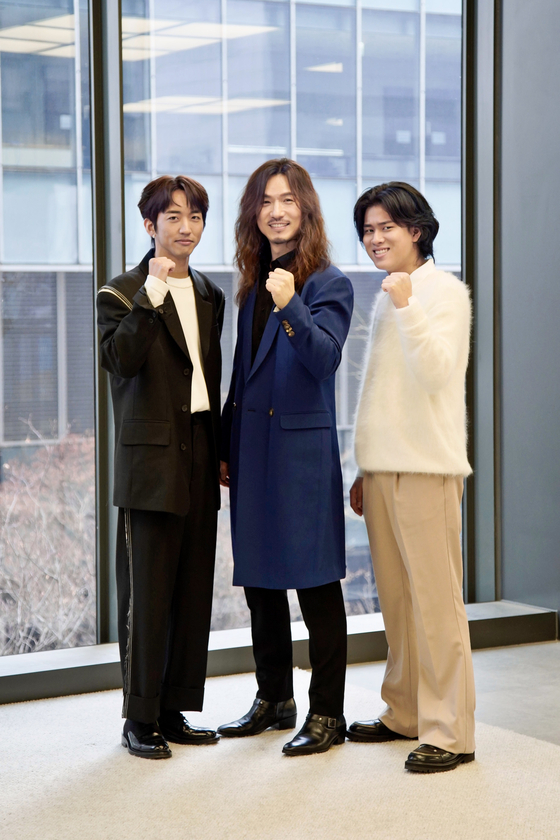 
Regardless of the outcome, some viewers and critics criticized the show for branding the contestants “nameless” singers, diminishing their careers and even being “rude.” The contestants, however, said that they not only accepted their “nameless” status but also felt grateful that the show was straightforward about it.

“I’ve never liked the word ‘nameless,’” said Lee Seung-yoon. “We all have names, but the word brings people down just because their names don’t shine as much as others. I’ve always told myself that I would live by my name but having the show just be very blunt about it felt comforting. I felt like it was shouting, ‘This is a competition for the nameless people. If you think you’re nameless, then come here to compete!’ It was the fact that they didn’t soften it that allowed me to appear on the show.”

Jeong said the show gave him the confidence he always needed. Both Jeong and Lee Seung-yoon had debuted as members of bands that failed to grab much attention, but Lee Mu-jin, the youngest of the three who was born in 2000, only had one track released in 2018 titled “A Walk” (translated) which was a part of an original soundtrack album for a webtoon series “Goyang Voice.”

“I never even thought about whether I was a ‘nameless’ singer or not — I asked myself whether I could even call myself a singer in the first place,” said Lee Mu-jin. “I wasn’t even a proper singer, I was just someone striving to become one. I was grateful that I could even compete when I hadn’t properly debuted. I just thought, I’ll take this as an audition and didn’t place too much meaning in it.” 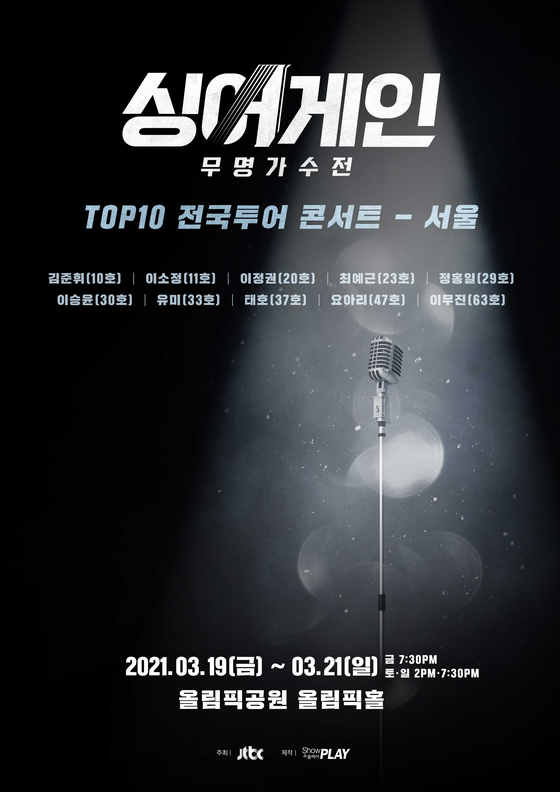 The poster for the ″Sing Again Concert″ set to take place from March 19 to 21. [JTBC]


Next month, the top 10 finalists of the show will perform in the “Sing Again” concert from March 19 to 21 at Olympic Hall in southern Seoul. The top three contestants signed contracts with show production company Showplay and will kick off concert tours from next month. Showplay will also be responsible for the singers’ management for a year. The company also plans to host the “Sing Again Top 10 Concert Tour” from next month to July.

All three contestants said that they will first focus on pulling off the concert and making the most of their second chance in the spotlight. After that Lee Mu-jin says he has a few songs he’s ready to reveal to the world, while Jeong says he’s ready to show Korea what real rock is. Jeong also asked for people’s continued love and support for contestants — even if they pursue a different direction from what they showed on the program.

“I was able to compete with some of the best singers through ‘Sing Again’ and that experience will stick with me,” said Jeong. “I think the support that we got along the way is what keeps us here now. I hope that people will keep on cheering for us, even if it’s not music. I hope people wait for our potential to bloom rather than judge us too soon.”

“Thank you, viewers, for taking the time to listen to our songs and vote and like us,” said Lee Seung-yoon. “We’ll continue our efforts from here like before.”

Lee Mu-jin added, “The program is over, but I want to think about the new beginning. I want to keep making music. Thank you for listening and I hope you keep listening.”