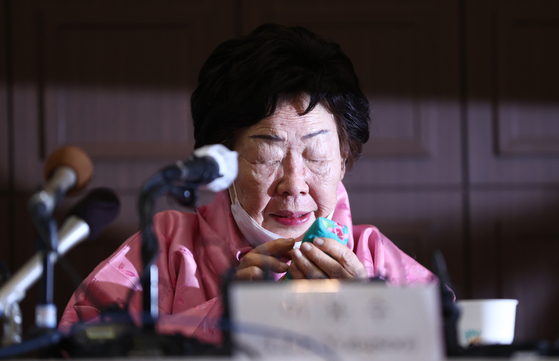 Lee Yong-soo, a 92-year-old survivor of Japanese wartime sexual slavery, cries during a press conference on Tuesday at the Korea Press Center in central Seoul. [YONHAP]


Lee Yong-soo, a survivor of Japan's wartime sexual slavery, demanded Tuesday the Korean government bring the issue of forced sexual slavery by Japan to the International Court of Justice (ICJ), calling for a resolution to the two countries' lingering animosity.

“I ask that the government hold Japan accountable under international law,” Lee, 92 years old, plead through tears at a press conference in central Seoul, referring to the Korean government and President Moon Jae-in.

“We do not have much time. I am already very old. My last wish is that President Moon obtains a ruling under international law."

"Comfort women" is a euphemism used to refer to women forced into sexual slavery by the Japanese military before and during the Pacific War. Estimates of comfort women range from the tens of thousands to up to 410,000, many of Korean descent.

On Jan. 8, the Seoul Central District Court ruled in favor of 12 comfort women survivors in their landmark compensation lawsuit filed against the government of Japan, ruling that Japan must pay 100 million won ($91,100) each to 12 comfort women victims.

Japan refused to participate in the trial, citing state immunity. Of the original plaintiffs who filed the lawsuit seven years ago, only five are still alive.

“Japan not only ignores the rulings of Korean courts, but it also claims that our judiciary violated international law,” Lee said. “I don’t want money. I just want complete acknowledgement and repentance [from the Japanese government].

"There must be an official judgment from the ICJ so that Japan can no longer lie or claim otherwise in international society.”

Lee also said that a judgement by the ICJ is necessary to end the lingering tensions over the issue between Seoul and Tokyo. As United Nations member states, both countries are obliged to abide by ICJ rulings, but both must also agree to refer the case to the court.

“Let us receive a fair judgement and a final resolution from the ICJ so that our two countries can live in friendship in the future,” Lee said, addressing the Japanese government and Japanese Prime Minister Yoshihide Suga. “I hate the sin, but not the sinner. Let us go to the ICJ so the truth can be made clear.”

The comfort women issue, a constant source of tension between Seoul and Tokyo, has attracted renewed attention after Professor Mark J. Ramseyer of Harvard Law School claimed in a controversial paper that comfort women victims were not forced into sexual slavery in the Japanese military’s front-line brothels but were voluntarily employed.

The paper triggered a backlash both in Korea and abroad, with students of Korean and Asian heritage at Harvard releasing signed statements condemning his claims as “incorrect and misleading.”

Lee is scheduled to issue a direct rebuttal to Ramseyer’s claims at a webinar, “Debunking Japanese Denialism on the ‘Comfort Women’ Issue through the Grassroots Movement in the U.S.” hosted by the Harvard Asian Pacific American Law Students Association on Tuesday.