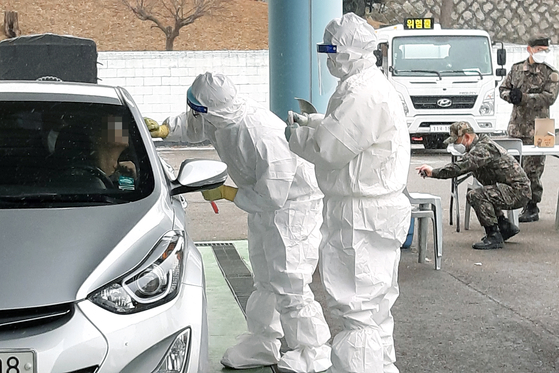 Quarantine officials administer Covid-19 tests for military officers at a drive-through testing station at the Defense Ministry in Yongsan District, central Seoul, on Tuesday after the first coronavirus case at the Joint Chiefs of Staff (JCS) was reported earlier in the day. [YONHAP]


New Covid-19 cases surged back to over 400 Tuesday after the Lunar New Year holiday, with areas outside greater Seoul also seeing infections back in the triple digits for the first time in nearly a fortnight.

Amid eased social distancing regulations starting this week, clusters of infections were seen in hospitals, sports facilities, churches and a boiler factory, as well as among family gatherings over the long weekend.

The previous three days saw daily cases in the 300s, as fewer people were tested over the holiday.

Most local infections were concentrated in the metropolitan area, with 155 cases reported in Seoul, 129 in Gyeonggi and 19 in Incheon.

Regions outside the greater Seoul area also saw a spike in cases, with infections passing 100 for the first time in 13 days. Of the 126 cases outside the capital area, 58 were in South Chungcheong, 17 in Busan, 11 in Daegu and seven each in Ulsan and North Chungcheong.

Regions outside of the metropolitan area last saw cases in the triple digits on Feb. 3, with 124 cases. 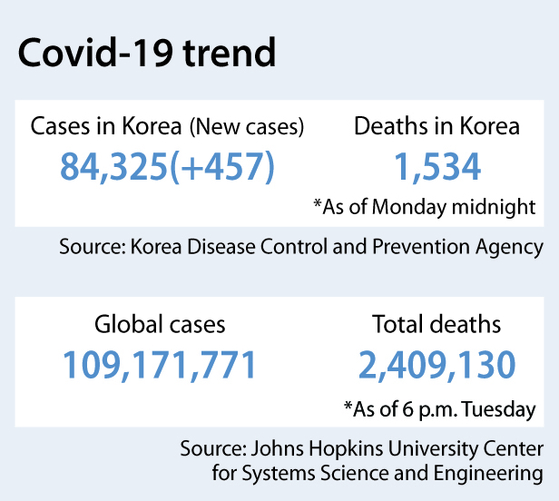 At a Kiturami Boiler factory in Asan, South Chungcheong, 75 people, including workers and their family members, have been infected with the virus as of Tuesday after the first patient was confirmed on Saturday.

Some 650 factory workers have been tested. Further community spread may also be a concern as some of the workers visited their hometowns over the Lunar New Year holiday.

In Busan, a family gathering over Lunar New Year led to six infections.

Health officials said it will step up the monitoring of major hospitals, noting 522 new cases were identified from 14 medical institutions over the past month. Likewise, 251 patients were linked to eight indoors fitness facilities in the past month.

In the past two weeks, 8.7 percent of cases were linked to hospitals and nursing homes, while 6.9 percent were imported cases, said the KDCA.

Soonchunhyang University Hospital in Yongsan District, central Seoul, added 30 new patients and reported 117 cases as of Tuesday, according to the KDCA.

The Victory Altar cluster in Bucheon, Gyeonggi, which spread to a nearby cram school added 19 new cases and has reported 151 infections so far.

Since Monday, social distancing measures were lowered a notch from Level 2.5 to Level 2, the third highest in a five-tier system, in the greater Seoul area and from Level 2 to Level 1.5 for other regions.

However, the ban on gatherings of five or more people has been retained.

A 9 p.m. curfew on restaurants, cafes and indoor fitness centers in the greater Seoul area was eased until 10 p.m. and lifted entirely in regions outside of greater Seoul. Restrictions on operating hours of many businesses such as movie theaters, internet cafes, cram schools, big supermarkets and amusement parks nationwide were completely lifted. Nighttime entertainment facilities such as clubs, bars and room salons that have been banned from operating will be allowed to operate until 10 p.m. nationwide.

While small business owners generally welcomed the eased restrictions, health experts warned that it may be too early to ease social distancing measures, saying Lunar New Year travels could lead to another wave of infections.

There were 28 imported cases amid continued worries over more transmissible overseas variants, with nine from Europe, seven from Russia, three from the United States and three from Indonesia.