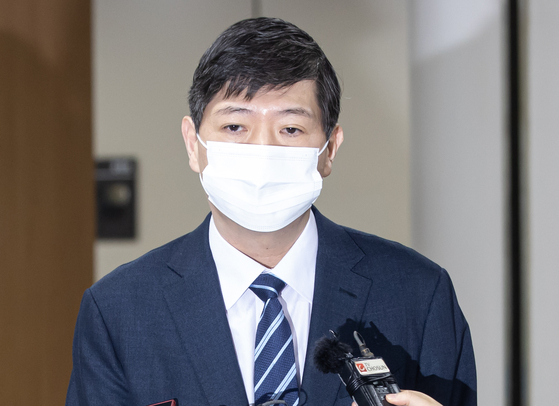 Rep. Kim Hong-gul, independent, answers a question from a reporter after the Seoul Central District Court convicts him on Tuesday for election law violation. [YONHAP]


Rep. Kim Hong-gul, 63, the youngest son of late President Kim Dae-jung, was convicted on Tuesday of violating the election law and slapped with a fine.

The Seoul Central District Court found Kim, an independent lawmaker, guilty of violating the election law because he publicized false information about his wealth during last year's general election campaign.

"I respect the ruling," Kim said Tuesday, as the court handed down a small fine that will allow him to keep his lawmaker post.

The prosecution indicted Kim last October for having omitted information about his wife's real estate properties when he disclosed his wealth to the National Election Commission as a part of his candidacy registration process.

Kim originally won a seat in the 21st National Assembly as a proportional lawmaker from the ruling Democratic Party (DP). After media raised suspicions about his wealth report, the DP expelled him in September.

During the trial, the prosecution requested the court punish Kim with a fine of 1.5 million won ($1,400), but the court decided on a fine of 800,000 won. Kim will be able to keep his seat in the National Assembly because the punishment is not heavy enough to expel him.

A lawmaker convicted of any election law violation resulting in a prison term or a fine of more than 1 million won automatically loses his or her seat.

According to the Public Official Election Act, providing false information to the public is punishable by up to five years in prison or a fine of up to 30 million won.