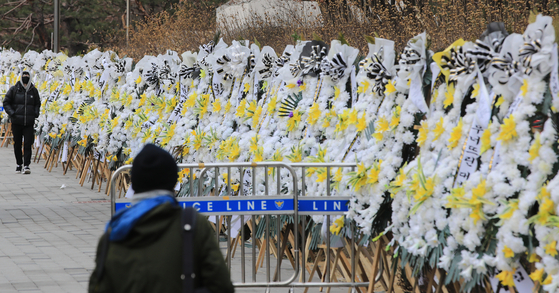 Funeral flower arrangements, sent to pressure Supreme Court Chief Justice Kim Myeong-su to resign because of his responsibility in the latest controversy surrounding the National Assembly's unprecedented impeachment of a sitting judge, stand outside the Supreme Court in Seocho-dong, southern Seoul. [NEWS1]


More than 150 lawyers have volunteered to join the defense team of Judge Lim Seong-geun in the country's first-ever impeachment trial of a sitting judge.

"Because the judge was politically impeached, lawyers from around the country volunteered to defend Lim in order to protect the independence of the judiciary and rule of law," Kim Hyun, former president of the Korea Bar Association, said Monday.

For the first time in the country's modern history, the ruling Democratic Party (DP) impeached Lim, accusing the sitting judge of the Busan High Court of meddling in politically sensitive trials during the previous administration. The unprecedented impeachment stirred controversy, as Lim made a bombshell revelation that Supreme Court Chief Justice Kim Myeong-su stopped him from stepping down last year — so the ruling party could impeach him later.

As of Monday, 155 lawyers volunteered to represent Lim in his impeachment trial at the Constitutional Court. Among them were veteran attorneys who once headed the Korean Bar Association and regional bar associations. Former Minister of Government Legislation Lee Seog-yeon joined the team along with several former judges and prosecutors.

Of the 155 attorneys, 27 were Lim's classmates from the Judicial Research and Training Institute.

The impeachment resolution was sent to the Constitutional Court for a trial. No court hearing has taken place so far, but the court has started to review the case. For the judge to be removed from office, at least six of the nine court justices must vote for the resolution.

The National Human Rights Commission assigned an investigator on Tuesday to look into a complaint filed by a civic group, Solidarity for Nomocracy, on Feb. 7. The group demanded the commission investigate the apparent rights infringement committed by Kim and recommend the Supreme Court to come up with a measure to prevent any similar cases from happening.

Kim is facing widespread condemnation for being complicit in the ruling party's impeachment of Lim. According to a recording released by Lim's lawyer hours before the National Assembly's voting, Kim refused to allow Lim to resign, enabling the DP to pass the motion for impeachment.

Although Kim initially denied local media reports that he had rejected Lim's resignation last year over the impeachment issue, the recording of Kim's conversation with Lim showed just the opposite.

Kim said the political situation forbid him from accepting the resignation. "Frankly speaking, lawmakers are making a fuss to impeach you," Kim told Lim in the recording. "What will the National Assembly say to me if I accept your resignation?"

"Lim's freedom to choose his job, general freedom of action, freedom of conscience and dignity were clearly violated," the civic group said in the complaint.

Separate from the National Human Rights Commission's investigation, the prosecution also opened a criminal investigation this week into Kim. Conservative civic groups and the main opposition People Power Party filed criminal complaints to the Supreme Prosecutors' Office to investigate Kim on charges of abuse of power.