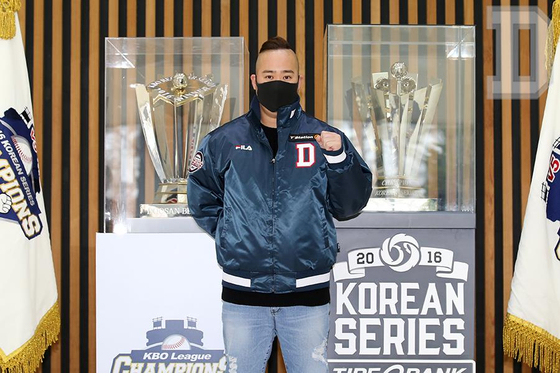 Yoo Hee-kwan poses after re-signing with the Doosan Bears on a one-year deal at a maximum 1 billion won ($910,000). [YONHAP]


The Doosan Bears have re-signed veteran Yoo Hee-kwan on a one-year contract, finalizing a deal at the very last minute to bring back the fan-favorite pitcher for the 2021 season.

Yoo is the sixth Doosan free agent to sign a contract this offseason and the fourth to return to the club. Third baseman Heo Kyoung-min signed a four-year deal with the Bears in December, followed by outfielder Jung Soo-bin on a six-year deal and shortstop Kim Jae-ho.

Second baseman Choi Joo-hwan and first baseman Oh Jae-il have both accepted offers from other clubs — Choi has moved to the SK Wyverns and Oh to the Samsung Lions. Pitcher Lee Yong-chan is the only player to remain unsigned.

At 34-years-old, Yoo has consistently picked up at least ten wins each season for the past eight years, but his form has started to slide over the last three seasons. Yoo has never been an especially fast pitcher and he typically racks up a fairly high ERA each season, but he has been a solid part of the Doosan starting rotation for almost a decade.

Things started to slip over the next few seasons, with Yoo falling to a 6.70 ERA in 2018 before bouncing back to a career-best 3.25 ERA in 2019. That inconsistency was on display again last year, when Yoo's losses outnumbered his wins for the first time in his career, at 11 to 10, and he racked up a 5.02 ERA.

Yoo will quickly rejoin the Bears at spring training.