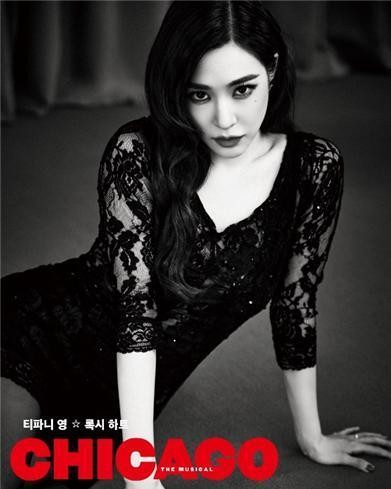 Tiffany Young, a Girls' Generation member, has been cast to play Roxie Hart in the upcoming production of ″Chicago.″ [SEENSEE COMPANY]


Tiffany Young, a member of K-pop girl group Girls’ Generation, has been cast to play Roxie Hart in the upcoming production of the hit musical “Chicago.”

Korea’s musical production company Seensee said Wednesday that Tiffany Young won the role, after beating odds of 200 to one. She’ll be alternating the role with musical actor Min Kyung-ah.

But it's not Tiffany Young’s first time to perform in a musical. In 2011 she took on the lead role of Carmen Diaz in the musical “Fame.”

“It’s been 10 years since I was on a musical stage,” said Tiffany Young. “Roxie Hart has always been the role of my dreams and it’s an honor to play her in ‘Chicago’ that celebrates its 21st anniversary.”

The musical is based on a 1926 play of the same name by reporter Maurine Dallas Watkins about actual criminals and crimes she reported on in Chicago. The musical revolves around Roxie Hart, an ambitious chorus girl, who murders her lover. Other cast members include Yoon Gong-ju, who will play Velma Kelly; and Park Gun-hyung and Choi Jae-lim, who will be alternating the role of Billy.

The Korean production of “Chicago,” which premiered here in 2000, kicks off at the D-Cube Arts Center in western Seoul on April 2.