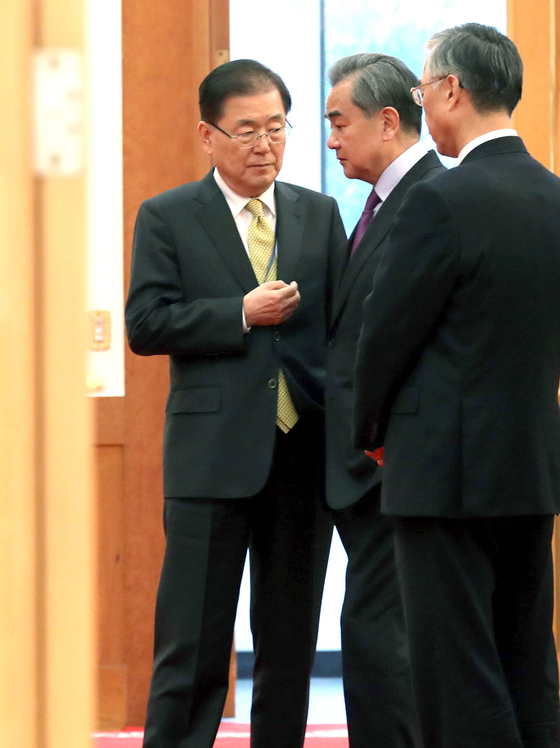 Wang told Chung, “China supports an open and inclusive regional partnership and opposes the division of blocs over ideology,” the Chinese Foreign Ministry stated after the call.

Analysts interpret the remarks as a response to new U.S. President Joe Biden's drive to pressure China by joining forces with allies that share democratic values.

China appears especially wary of Seoul’s participation in an expanded Quadrilateral Dialogue, or Quad — a security cooperation mechanism between the United States, Japan, Australia and India.

The Biden administration is trying to strengthen the Quad mechanism that was established under the former Donald Trump government and seen as a way to contain China.

Such remarks by Wang were not included in the South Korean Ministry of Foreign Affairs’ statement on Chung’s call with Wang, which focused on bilateral relations, the Korean Peninsula situation and regional matters.

Wang congratulated Chung on taking up the new post and said he hoped to further develop relations between the two countries and form a good working relationship and friendship with him, according to Seoul’s Foreign Ministry.

The two top envoys “recognized the importance of exchanges between leaders and high-level officials between the two countries to strengthen and develop Korea-China relations as a strategic cooperative partnership, and agreed to actively pursue this,” the ministry added.

Wang reaffirmed that Chinese President Xi Jinping has intentions to visit South Korea “when the Covid-19 situation stabilizes” and agreed to continue consultations for the visit to take place at an early date, said the ministry. Wang also invited Chung to visit Beijing.

The two sides noted the upcoming 30th anniversary of diplomatic relations next year and agreed to promote exchange and cooperation between the two countries through a “Korea-China Cultural Exchange Year” starting this year.

They agreed on close consultations regarding Seoul’s initiative for a Northeast Asia cooperation initiative for infectious disease control and public health.

They also shared ideas on how to manage the regional situation in a stable manner and “agreed to strengthen cooperation to enable conditions for substantive progress toward the complete denuclearization and establishment of a permanent peace regime on the Korean Peninsula,” said Seoul's Foreign Ministry.

Wang noted that “each country must strengthen communication and cooperation to realize peace and stability on the Korean Peninsula and to realize denuclearization and establish a peace mechanism.”

Chung in his first press conference earlier this month indicated that Korea is open to supporting the Quad.

Seoul has tried to avoid getting involved in the Sino-U.S. rivalry but has often been pushed into difficult situations amid tensions between its alliance partner the United States and largest trading partner China.

Blinken highlighted the importance of trilateral cooperation with Japan, underscored the need for denuclearization of the Korean Peninsula and stressed Biden’s “commitment to strengthening U.S. alliances and partnerships."

Washington has also been urging closer trilateral cooperation between its closest allies in the region, Seoul and Tokyo, as they struggle to overcome strained relations from historical disputes and a trade spat.