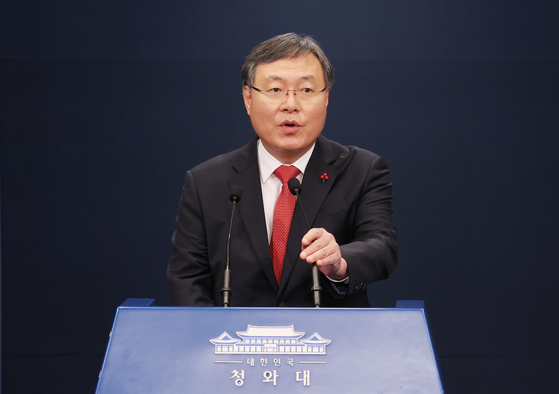 In this file photo, Shin Hyun-soo talks to reporters at the Blue House press center after President Moon Jae-in named him the new senior presidential secretary for civil affairs on Dec. 31, 2020. [YONHAP]


President Moon Jae-in's key aide in charge of prosecutorial reform offered to step down six weeks into the job after the new minister of justice ignored him in a recent reshuffle, political sources said Wednesday.

"The prosecution and the Ministry of Justice had different opinions on a reshuffle of senior prosecutors," said the source. "Shin tried to mediate their differences, but the ministry announced the reshuffle in the middle of the process, apparently triggering Shin to express his intention to resign."

Shin, a former prosecutor, started as senior presidential secretary for civil affairs on Jan. 1. He had worked with Moon in the Blue House during the Roh Moo-hyun administration in 2004.

Justice Minister Park Beom-kye took office on Jan. 28 and announced his first prosecutorial reshuffle on Feb. 7. While the prosecution and the ministry were still discussing a shakeup of senior prosecutors, Park made a rare decision to announce four high-profile appointments on a Sunday. In the reshuffle, Park spared a key ally of the administration and disregarded an appeal by Prosecutor General Yoon Seok-youl.

Asked if Park pushed the appointments without completing his talks with Yoon and if Moon approved him doing so, the source said, "Please leave the president out of it."

He, however, admitted that the appointments were made according to Park's wishes.

"Shin told Moon several times that he wanted to step down, and Moon stopped him every time," he said. "Shin, however, still maintains that he wants to resign."

Shin is still doing his job. He attended a cabinet meeting on Tuesday and an internal Blue House meeting on Wednesday morning. 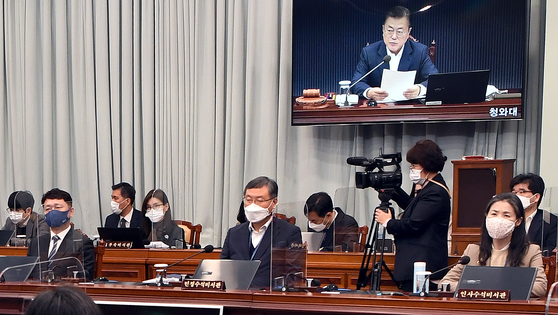 A senior ruling party source also confirmed Tuesday that Shin had expressed his intention to step down.

According to the source, Justice Minister Park and Prosecutor General Yoon had meetings on Feb. 2 and 5 to discuss how to reshuffle senior prosecutors. During the meetings, Yoon asked that Lee Sung-yoon, head of the Seoul Central District Prosecutors' Office, be removed because his soft-pedaling of investigations involving top Blue House figures had cost him the support of prosecutors under him.

Park ignored the appeal, retaining Lee when he announced the reshuffle on Feb. 7. Later, speculation arose that Shin's opinion was also ignored.

"At the beginning of the Moon administration, senior civil affairs secretary Cho Kuk routinely consulted with Justice Minister Park Sang-ki and Prosecutor General Moon Moo-il about appointments," said a former member of the Moon Blue House's office of the senior secretary for civil affairs. "But the communication channel was severed after the scandal surrounding Cho and the war between Justice Minister Choo Mi-ae and Prosecutor General Yoon."

Moon has aggressively pushed a campaign to weaken the powers of state prosecutors. His ruling Democratic Party (DP) passed controversial laws to shift the prosecution's investigative powers to other agencies such as the Corruption Investigation Office.

Moon ignored a custom of appointing a member of the prosecution as the senior secretary for civil affairs.

His first pick was Cho, a law professor and one of his key political allies, who later served as minister of justice for 35 days until he stepped down over an academic and financial fraud scandal surrounding his family. Two successors of Cho were both from the Board of Audit and Inspection.

As the new justice minister started the process of reshuffling senior prosecutors, Shin tried to mediate between Park and Yoon.

The mood, however, turned sour over a probe into the controversial shut down of the country's second-oldest nuclear reactor earlier than scheduled. Top officials of the energy ministry and the Blue House were suspected of abusing their power to shut down the Wolsong-1 reactor in 2018 in order to placate Moon's nuclear phase-out policy.

A senior presidential source on Wednesday denied speculation that Moon sanctioned Park's prosecutorial reshuffle to express his anger at the prosecution. "It is completely untrue," he said.