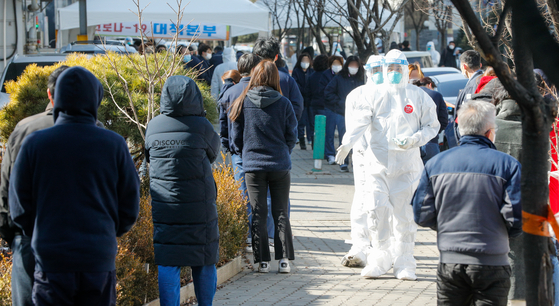 Quarantine officials run a Covid-19 testing center at the Jingwan General Industrial Complex in Namyangju, Gyeonggi, Wednesday after a cluster of 115 people emerged from a plastic factory there. The industrial complex is home to 59 companies with over 1,200 workers. [NEWS1]


Korea’s daily Covid-19 cases topped 600, the highest figure in over a month, as health authorities Wednesday warned the public against letting its guard down and allowing a fourth wave of infections in the springtime.

A large cluster of infections emerged at the Daedong Plastic factory in the Jingwan General Industrial Complex in Namyangju, Gyeonggi, linked with 115 Covid-19 cases as of Wednesday. There are concerns of further infections as the complex is home to 59 companies with over 1,200 workers.

Most of the infected patients are foreign workers from 19 countries who lived together in a staff dormitory located on the third floor of the plastic factory.

The first patient, a 24-year-old Cambodian factory worker, got tested at the Soonchunhyang University Hospital in Yongsan District, central Seoul, Saturday after showing coronavirus symptoms and was found to be Covid-19 positive, according to the Namyangju city government.

The Yongsan District Health Center informed the Namyangju Health Center of the results, leading to the testing of 177 workers at the factory.

The Namyangju city government said that 114 additional workers were confirmed Covid-19 positive Wednesday morning, and that 106 were foreign workers, while the rest were Koreans.

Eight workers left the plastic factory over the Lunar New Year holiday and while two returned, the whereabouts of six are unclear currently, said the city officials.


The city government closed off the factory and, with the cooperation of local police, set up a testing center on location to test all 1,239 workers at the 59 companies. Textiles, metal processing and electrical equipment factories are among plants operated in the 142,000-square meter Jingwan General Industrial Complex, which opened in 2013.

Tuesday's was the highest daily cases since Jan. 10, when 657 cases were reported, and especially compared to cases in the 300s and 400s in recent days. 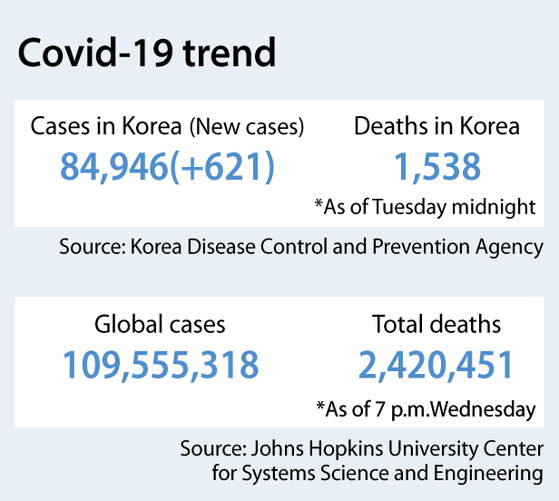 There were 31 imported cases amid continued worries over more transmissible overseas variants, with nine from Europe, eight from Africa and seven from the United States. There were six Koreans and 25 foreign travelers.

Cases were reported in all cities and provinces outside of the greater Seoul area except for Jeju, with 74 in South Chungcheong, 18 in Busan, 15 in South Jeolla and 14 in North Gyeongsang, 12 in Daegu and nine in Ulsan.

Another cluster of infections at a Kiturami Boiler factory in Asan, South Chungcheong had reported 122 cases as of Wednesday after the first patient, a worker in his 20s, was confirmed on Saturday.

There were 106 factory workers and 16 family members, according to the South Chungcheong provincial government. They included some 20 foreign workers.

Quarantine officials compared the factory to “a large container” because of the packed, enclosed working area offering little ventilation. Some employees were confirmed as not wearing masks.

The workers also dined together in the cafeteria, up to 100 people at a time, though there were dividers between seats. They shared locker rooms, resting areas and showers.

Quarantine authorities collected and analyzed environmental samples from 16 facilities at the factory, and the virus was found in six areas including the locker room, sofas, vending machines, heaters and conference room tables.

Officials expressed concerns that many workers traveled to their hometowns over the four-day Lunar New Year holiday last week.

Soonchunhyang University Hospital in Yongsan District, central Seoul, added 23 patients, reporting a total of 140 cases, according to the KDCA as of Wednesday.

A hagwon, or cram school, in Songpa District, eastern Seoul, reported a total of 18 cases after the first patient was confirmed Friday.

Prime Minister Chung Sye-kyun said Wednesday in a Central Disaster and Safety Countermeasure Headquarters meeting, “The third wave of infections is not over yet, and some experts warn of the possibility of a fourth wave in March or April. It may seem that daily life has returned a little through eased social distancing, but now is not the time to let down our guard.”

Chung pinpointed cases of violations of social distancing regulations such as clubs that open at 5 a.m. with partiers not wearing masks and dancing together, or large groups of people who head to nearby motels to continue drinking after bars close at 10 p.m.

He said that the “easing of the government social distancing measures does not mean we plan to ease quarantine efforts.”

Since Monday, social distancing measures were lowered a notch from Level 2.5 to Level 2, the third highest in a five-tier system, in the greater Seoul area and from Level 2 to Level 1.5 for other regions. Nighttime entertainment facilities such as clubs, bars and room salons that had been banned from operating are allowed to operate until 10 p.m. nationwide, but are obliged to enforce mask-wearing and prohibit dancing and table-hopping. The ban on gatherings of five or more people has been retained.

Health authorities are worried about the spread of infection over the Lunar New Year holiday, with infections from family gatherings popping up in cities including Busan.

Daily local infections in the past week averaged 405.9 cases.

Sohn Young-rae, a senior health official, said in a briefing Wednesday, “If the infections continue to rise, we have may consider reviewing strengthening social distancing measures again.”

The government has said it plans to reveal a new social distancing scheme next month centered around “autonomy and responsibility” by the public, acknowledging economic difficulties faced by small businesses, but such a campaign could be pushed back if there is another spike in cases.