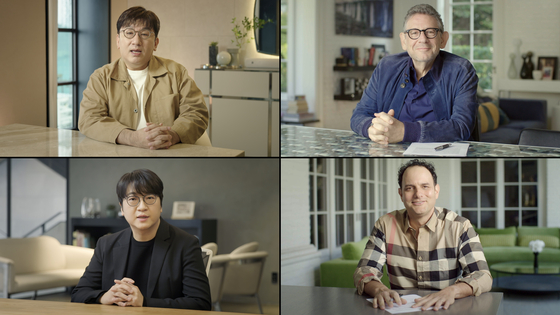 The two companies held an online press conference Thursday morning to announce that Geffen Records, a UMG label, will lead a joint venture between Big Hit and UMG to hold auditions for a boy band using the best of the two companies' assets. Big Hit Entertainment will be in charge of training the members of the band and creating content related to the band in what Lenzo Yoon, CEO of Big Hit Entertainment's Global Business, dubbed the “full-production K-pop system.”

"The auditions will work on the K-pop system — a full production that combines music, performance, fashion, music video and communication with fans," Yoon said.

Geffen Records has been home to some of the biggest acts in music history including Elton John, Nirvana, Guns N' Roses and Avicii as well as young pop stars like Olivia Rodrigo and Yungblud. Members of the band will be selected on a TV program that will be produced by UMG's media partner and begin airing in 2022.

"With their innovative approach to developing artists and embracing new technology, Big Hit has become one of the most dynamic companies in music entertainment," said Sir Lucian Grainge, Chairman and CEO of UMG. "We're thrilled to be working together as we launch a new joint venture between our companies that will further accelerate K-pop as a global cultural phenomenon."

“At a time when virtual concerts have become the ‘new normal,’ we look forward to showcasing curated performances from our artists through VenewLive, using the best in technology and interactive experiences,” Grainge said.

Big Hit Entertainment and UMG announced last week that the two companies will co-invest in VenewLive, a streaming platform for online K-pop concerts, along with Korean entertainment agency YG Entertainment. The name VenewLive (pronounced venue live) was announced on Feb. 10, but the platform had been developed in 2020 to be used to live-stream online concerts by K-pop bands during Covid-19. The platform has successfully streamed online K-pop concerts under the Big Hit label, including BTS’s “Bang Bang Con: The Live” in June 2020 and “BTS Map Of The Soul ON:E” in October 2020.

“I’m particularly excited about this partnership because the success of both of our companies has been built on a foundation of shared values, including: an ethic of mutual respect with our artists; an expertise in connecting with fans; and our ability to leverage technology to build global entertainment brands that transcend music," Grainge said.

This signifies the global expansion of K-pop, and may also bring change to pop music industry, according to music critic Cha Woo-jin.

“This means that the K-pop system will be combined with the U.S. pop industry,” said Cha. “UMG will be taking a K-pop system that has been proven successful and Big Hit Entertainment will get to experience a global-scale production and distribution process. The Asian [music] market is growing, so could also help UMG gain more influence here.”