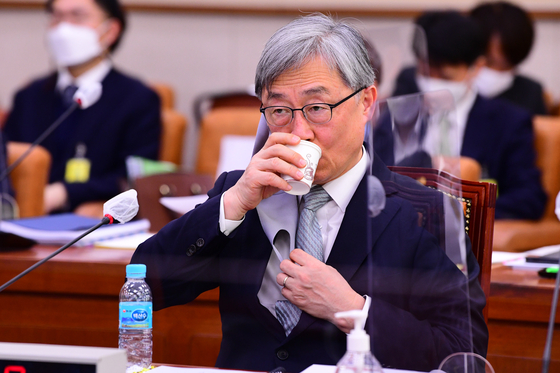 Choe Jae-hyeong, chairman of the Board of Audit and Inspection, drinks water during the Legislation and Judiciary Committee meeting at the National Assembly on Thursday. [YONHAP]


The country's main audit agency is expected to announce whether the Moon Jae-in administration ignored legitimate policymaking processes while creating its nuclear phaseout blueprint next month.

"The Board of Audit and Inspection [BAI] will soon complete its probe," a senior government source told the JoongAng Ilbo on Wednesday. "After the report is reviewed by the council of commissioners, the outcome will be announced without much delay."

According to the law governing the watchdog, audit reports require review and approval by the BAI's council of commissioners before being announced. "The council meeting is scheduled for next month," another source close to the administration said. "The outcome can be announced as early as late next month."

The announcement, if made next month, will take place during a politically sensitive time. The country will hold major by-elections on April 7 to fill vacancies in mayorships of Seoul and Busan. Both posts were vacated as a result of sexual assault scandals by the mayors who were both members of the ruling Democratic Party (DP).

The audit was prompted by a request filed by an opposition lawmaker in 2019. Rep. Jeong Kab-yoon of then-Liberty Korea Party, today's People Power Party (PPP), collected signatures from 547 residents of Ulsan, where nuclear plants are located, and asked the BAI in June 2019 to conduct a probe on the Moon administration's policy to ultimately end the country's reliance on nuclear energy.

Ulsan is home to two nuclear reactors — Shin Kori 3 and 4. Construction on Shin Kori 5 and 6 are currently ongoing, scheduled for completion in 2023 and 2024, respectively. 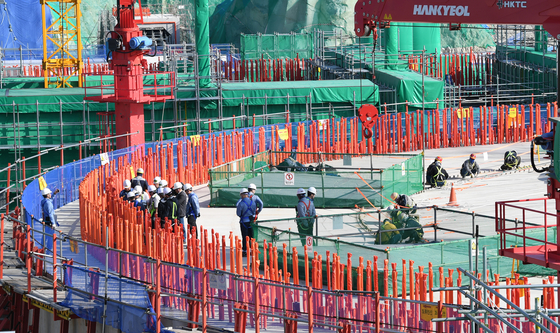 In this file photo, workers of the Nuclear Safety and Security Commission and the Korea Institute of Nuclear Safety conduct a safety inspection at the construction site of Shin Kori 5 and 6 in Ulsan on Oct. 25, 2017. [JOONGANG ILBO]


"The nuclear phaseout policy was unilaterally pushed forward without legal grounds just because it was the president's campaign pledge," Jeong said in his request for a probe. He demanded an audit into four allegations, but the BAI decided on September 2019 that it will look into only the appropriateness of the Moon administration's process to create the Energy Master Plan.

The Energy Master Plan, created every five years, is the government's highest statutory road map for energy. Other subordinate plans, such as the Electric Energy Supply Master Plan, are created according to the master plan.

The 2nd Energy Master Plan of the country was created in 2014 during the presidency of Moon's predecessor, Park Geun-hye. According to the plan, nuclear energy was set to comprise 29 percent of the country's power generation by 2035.

After Moon took office in May 2017, the government created the Electric Energy Supply Master Plan in the same year. According to the plan, the government pledged to lower the reliance on nuclear energy to 23.9 percent by 2030.

A similar scheme was included in the 3rd Energy Master Plan announced in 2019.

The PPP said the government should have created the subordinate electricity supply plan according to the Energy Master Plan, but ignored the higher road map.

The Ministry of Trade, Industry and Energy, argued the Energy Master Plan has no binding power over the electricity supply plan and there is no legal problem.

Residents of Gyeongju, North Gyeongsang, hold a rally in front of the Wolsong Nuclear Plant on Jan. 18 to demand the Moon Jae-in administration end its nuclear phaseout policy. [NEWS1]


The BAI started investigating the Energy Ministry and the Ministry of Science and ICT on Jan. 11. The probe formally began one year and four months late because of the Covid-19 pandemic and another sensitive probe concerning the government's controversial decision to shut down the country's second-oldest Wolsong-1 nuclear reactor.

Top politicians of the DP attacked the BAI last month for starting the probe, seen as a political move. "The head of the powerful state agency was making an acceptable attempt to challenge the basic policy direction of the government," said Im Jong-seok, former presidential chief of staff of Moon.

The BAI has maintained that the audit is not about the appropriateness or legitimacy of the nuclear phaseout policy. "Because the probe can invite misunderstanding, the BAI is only looking into the procedural legitimacy," a senior government official said.

If the BAI concludes that there was a procedural lapse in creating the policy, the political aftermath is expected to be enormous. Depending on the timing of the announcement, it may also affect the April by-elections.

If the council takes an unusually long time for its review, the announcement will also be delayed. When the BAI conducted the audit on the Wolsong-1 reactor shutdown decision before the April general elections in 2020, the council could not reach a conclusion before the elections.

The outcome was ultimately announced in October 2020, and the BAI slammed the Wolsong-1 shutdown process. It announced that the Korea Hydro and Nuclear Power (KHNP) decided in 2018 to shut down the reactor early due to a faulty assessment that unfairly underestimated the economic advantage of keeping it alive. "The economic effectiveness of continuing operation of the reactor was unreasonably devalued," the BAI said in the report.

At the time, the BAI also avoided ruling on the validity of the state-run corporation's decision, stressing that the audit was focused on KHNP's decision-making process and fairness of the economic viability evaluation.

Following the audit, the prosecution started a probe into the suspicions that top officials of the Energy Ministry and the Blue House were suspected of abusing their power to shut down the reactor in order to placate Moon's nuclear phase-out policy. The Daejeon District Prosecutors' Office is still pursing the investigation.

Board of Audit and Inspection nuclear election