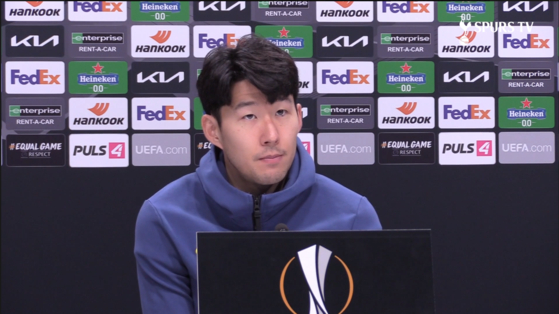 Son Heung-min discusses Tottenham Hotspur's drop in the table in a press conference ahead of the club's Europe League clash with Wolfsberger. [SCREEN CAPTURE]

Speaking ahead of the match against Wolfsberger, Son answered a series of questions about Spurs' drop in the table this year, falling from first place in December last year to ninth as of Thursday. Footage of the press conference was posted on the Spurs website, although the discussion about Mourinho was not included in the posted clip.

"The changing room I think has been fantastic," Son said, according to the Daily Mirror. "Obviously it is depending on the results. I am very sad if we lose. I am happy if we win. It is like everyone else."

Son was also asked about rumors that the players are unhappy with Mourinho's leadership.

"The mood went a little bit down when we had a couple of bad results but I think the changing room has not changed about these kind of things. Everyone is happy, everyone is having a laugh. Everyone is focused in every single game so what should I say? It is a bad rumor."

"Harry is just so good and when he has the ball he's just looking around," Son said. "Scoring goals is what he can do, but his passing is just as good as this scoring. When he has the ball I know where to run. We've been working together for almost six years now and he knows what I like, so I think this relationship is very special, especially this season.

"We're the kind of guys who want to work harder than before and be better and better every day."

Spurs will be back in action in the Europa League against Wolfsberger today, or at 2:55 a.m. on Friday in Korea.