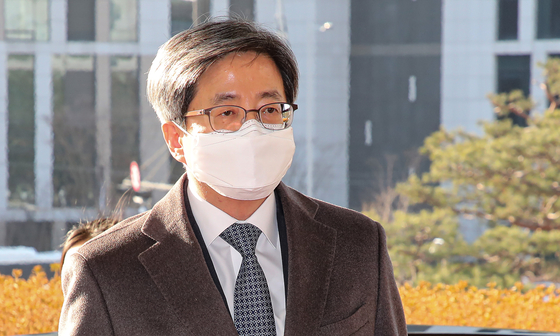 
Supreme Court Chief Justice Kim Myeong-su on Friday brushed off public demand that he step down for having surrendered the judiciary's independence to please the ruling party's political agenda.

"As the supreme court chief justice, I cannot hide the burden on my heart from seeing a sitting judge be impeached by the National Assembly," Kim wrote in a statement addressing the people and members of the judiciary on the court's intranet. "In the process, I have created a mess and troubled the people and the members of the judiciary. I offer my deepest apologies for having disappointed them and troubling them with my careless response."

Kim was apologizing as public condemnations snowballed over his decision to assist the ruling party in pushing forward an unprecedented impeachment of a sitting judge and his subsequent lie to cover it up.

For the first time in the country's modern history, the Democratic Party (DP) on Feb. 4 impeached Judge Lim Seong-geun, accusing the sitting judge of the Busan High Court of meddling in politically sensitive trials during the previous administration. The unprecedented impeachment stirred controversy, as Lim made a bombshell revelation that Kim had stopped him from stepping down last year — so the ruling party could impeach him later.

According to a recording released by Lim's lawyer hours before the National Assembly's voting, Kim made clear that the political situation forbid him from accepting the resignation. "Frankly speaking, lawmakers are making a fuss to impeach you," Kim told Lim in the recording. "What will the National Assembly say to me if I accept your resignation?"

After the disclosure, Kim faced condemnation for being complicit in the ruling party's impeachment of Lim and for having lied about it. He then issued a brief apology one day after the revelation, claiming that his denial was based on an "inaccurate recollection of what had happened nine months ago."

In his statement Friday, Kim continued to insist that he did not reject Lim's resignation letter because of the political circumstances. "I made the decision to reject the judge's resignation based on various circumstances including relevant laws," Kim said. "I want to make clear that there was no political consideration."

Kim said he has put forth effort to ultimately establish a system where judges are guaranteed independence. "It is unimaginable for me to communicate with politicians and make inappropriate political decisions to threaten the independence of the judiciary," he said.

Kim made clear he will complete his term. He was appointed by President Moon Jae-in in September 2017. The tenure of a Supreme Court chief justice is a single six-year term.

"I will continue working to complete judiciary reform and fulfill my constitutional duty," he wrote.