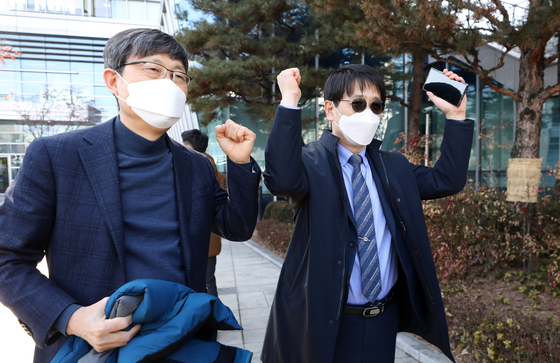 The Seoul Administrative Court on Thursday ruled in favor of Pai Chai High School and Sehwa High School and accepted their request to cancel the Seoul Metropolitan Education Office's decision in 2019 to disqualify them as autonomous schools. The two schools filed the lawsuit in August 2019.

Autonomous high schools maintain financial independence from the government and in return are granted more freedom in picking students, creating their curriculum and charging tuition.

Following their disqualifications, the 10 schools filed injunctions to the administrative court and started lawsuits to restore their status. All 10 schools won their injunctions and are currently continuing their operations as autonomous schools.

In December last year, Haeundae High School in Busan won its lawsuit and restored its status as an autonomous school. Pai Chai and Sehwa won their cases on Thursday, and the remaining seven schools will soon have their rulings.

The Seoul Administrative Court ruled that the education office abused its discretionary power when it used new evaluation standards to strip the schools of their qualifications.

The Association of Autonomous High Schools in Seoul welcomed the ruling, but the Seoul Metropolitan Education Office said it will appeal the court's decision in favor of Pai Chai and Sehwa.

"It is a ruling that goes against our efforts to normalize public education," said Cho Hee-yeon, superintendent of Seoul Metropolitan Office of Education. "We will immediately appeal."

Cho, who has been pushing for strong educational reform against elitism, also said he expects a more progressive judgement from the court in the remaining lawsuits.

Disqualified schools have complained that the education office used unfair standards when it conducted the evaluation in 2019. Although the process was to review the schools' performances for the past five years, the office presented new standards just four months before the evaluation and applied them to assess the whole five-year records.