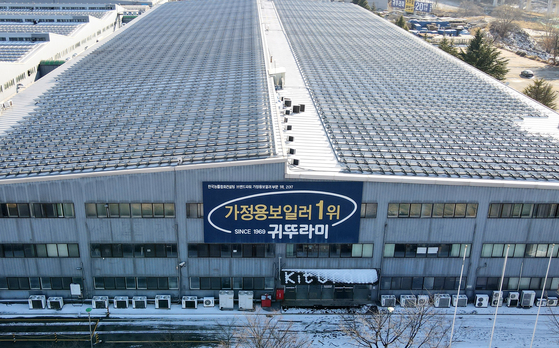 Kiturami Boiler factory in Asan, South Chungcheong, is amongst factories in Korea that added clusters of Covid-19 infections as of late. Many foreign workers at these factories have also been infected. [NEWS1]

The government will inspect nearly 2,000 meat production and manufacturing factories in the greater Seoul area, that have hired thousands of foreign workers, to confirm whether they are following Covid-19 social distancing guidelines.

“We will be interviewing some 16,000 foreign workers at 1,945 meat factories and factories of other small- and medium-sized companies in the greater Seoul area starting next week,” the Central Disaster and Safety Countermeasure Headquarters, part of the Ministry of Health and Welfare, said in its statement Friday.

The interviews will be conducted over the phone, asking questions regarding the implementation of social distancing measures. Inquiries will include whether employees wear masks while working and whether the windows are opened regularly to allow for proper ventilation. In the case of workers living together in dormitories, they may also be asked about their living conditions and whether the companies regularly disinfect the facility.

A large cluster of infections emerged at the Daedong Plastic factory in the Jingwan General Industrial Complex in Namyangju, Gyeonggi, linked to 122 worker infections as of Thursday.

Of these, 113 are foreign nationals from around 20 countries who lived together in a staff dormitory located on the third floor of the plastic factory.

Another cluster of infections at Kiturami Boiler factory in Asan, South Chungcheong, had reported 160 cases as of Thursday after the first patient, a worker in his 20s, was confirmed last week. Some 20 of those infected are foreign workers.


In addition to the nearly 2,000 factories in the greater Seoul area, the Health Ministry will be making on-site visits to some 1,000 construction sites and farms throughout the country that have hired foreign hands to see if they are following similar social distancing and Covid-19 prevention measures.

“Any company found to be falling short in its preventive measures may be fined,” the headquarters said in its statement.

The virtual interviews and on-site visits at the factories will be conducted through March 12.

Korea added 561 new virus cases Thursday, of which 533 were local cases and 28 imported.