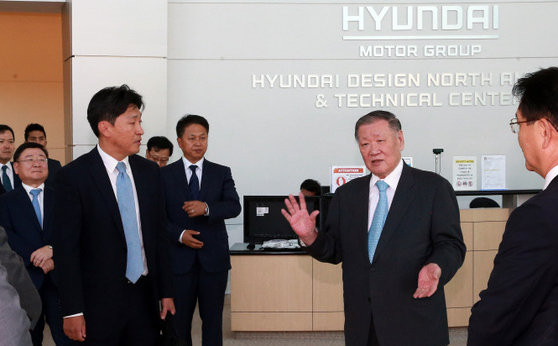 Chung Mong-koo, honorary chairman of Hyundai Motor Group, in a photo taken in 2016 at the group's design center in California. [HYUNDAI MOTOR]


Chung Mong-koo, the former chairman of Hyundai Motor Group, will step down from his last remaining official position at the auto group next month, giving up his board seat at auto parts maker Hyundai Mobis.

Chung, who will retain the honorific title honorary chairman of Hyundai Motor Group, is expected to resign from his board seat at Hyundai Mobis at a board meeting scheduled for next month.

Hyundai Mobis said through a filing posted on Feb. 18 that four board member appointments at the company will be voted on at the meeting scheduled for March 24.

Chung's term as a Hyundai Mobis board member was supposed to end in March 2022, but the move has come earlier than expected. Chung's withdrawal from the group's management started to pick up pace last year.

Chung resigned from Hyundai Motor's board in March 2020, following the same move at Hyundai Steel in 2014 and Hyundai Engineering & Construction in 2018. Chung remains a non-registered executive at Hyundai Motor.

Chung then stepped down as the group's chairman in October, a position he has held for the past 21 years, as his only son Euisun Chung replaced his father. The older Chung has been serving as honorary chairman since then.

Whether Chung Mong-koo will continue to serve as a non-registered executive at Hyundai Motor as well as at Hyundai Mobis remains to be seen.

Hyundai Precision Industry started as a container-making company but expanded into an automotive parts business with Chung at the helm.

The successful launch of the Galloper SUV in 1991 was widely credited to Chung at Hyundai Precision. He was appointed as chairman of the board of Hyundai Motor and Kia in 1999 followed by an appointment as the group’s chairman in 2000.

Chung strictly managed quality control at the two auto companies for the past two decades, and they now jointly form the world's fifth largest automaker. He was inducted to the U.S. Automotive Hall of Fame last year, the first Korean to win the accolade.

Chung's departure from the group's management has been largely expected, it was just a matter of when.

Chung hasn't made a public appearance since 2016, when he participated in a parliamentary hearing in regards to former President Park Geun-hye's influence-peddling scandal.

Board meeting attendance disclosure become mandatory in 2019. Chung has made no appearances since then, according to Hyundai Motor's 2018 and 2019 annual reports.