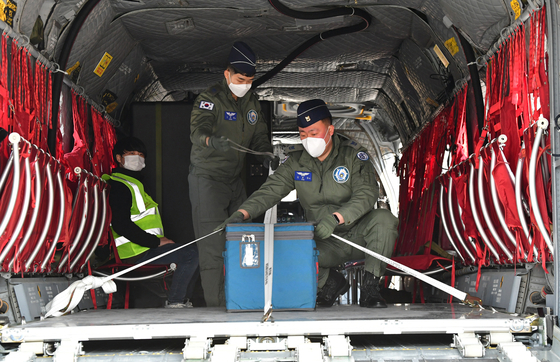 The first batch of the Pfizer-BioNTech vaccine, enough for 58,500 people, provided through the Covax Facility, the World Health Organization’s (WHO) vaccine-sharing mechanism, is set to arrive in Korea Friday, said Chung during a Covid-19 response meeting.

The country’s first coronavirus vaccinations are set to kick off on Friday with the administering of AstraZeneca shots to residents and staff of nursing homes and other high-risk facilities who are younger than 65 years old.

The Central Disease Control Headquarters said that 93.8 percent, or 344,181, of the 366,959 people who fall into the initial group eligible for vaccinations said they are willing to receive the shots.

The government on Friday carried out a second mock drill running through the transport of AstraZeneca's vaccines, including delivery to the remote Jeju and Ulleung islands through military cargo planes and helicopters. 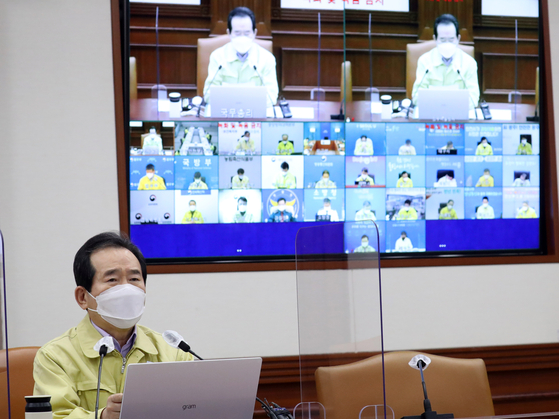 Prime Minister Chung Sye-kyun announces Sunday that 117,000 doses of the Pfizer vaccine will arrive next Friday and that vaccinations of frontline Covid-19 medical workers will begin the following day during a coronavirus response meeting at the central government complex in central Seoul. [NEW1]


“We urge the public to actively participate in vaccination as the government has taken the responsibility of verifying its safety and effectiveness,” said Chung.

While noting public fatigue over the past year, Chung said it was too early for people to let down their guard on Covid-19 infections, adding, “The number of virus variants introduced from overseas continues to increase. As a new semester begins with spring and warmer weather, the amount of activity will increase. Even when vaccinations start, there is a considerable amount of time left until herd immunity.”

The Korea Disease Control and Prevention Agency (KDCA) on Saturday reported a total of 119 cases of overseas variants in the country, of which 100 were from Britain, 13 from South Africa and six from Brazil. Of the 20 new variant cases, all of the British strain, 10 were domestically transmitted and 10 were imported.

The 10 new domestic variant cases were all linked to an earlier cluster related to gatherings of a Syrian family and their relatives in Yeouju and Siheung in Gyeonggi.

This compares to 448 cases on Friday and 561 on Saturday. Fewer people are tested over the weekend.

The government lowered social distancing measures one week ago, but the country has seen an uptick in cases following the Lunar New Year holiday from Feb. 11 to 14. 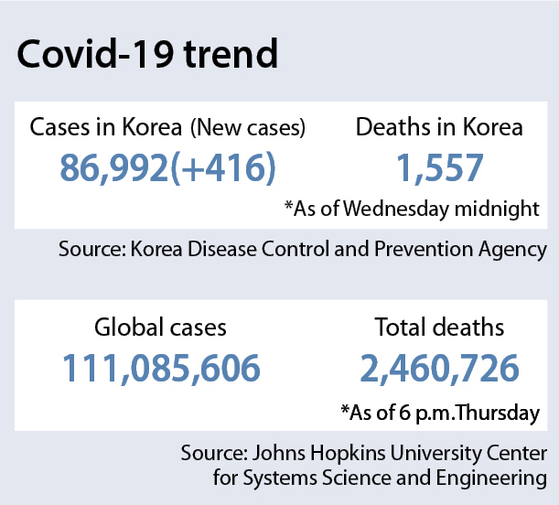 There were 25 imported cases, including five from Europe, four from Africa and three from the United States.

A dance hall in Seongnam, Gyeonggi, is linked to 46 infections as of Sunday after the first patient was confirmed on Feb. 13. People who visited the dance hall from Feb. 6 to 16 are required to get Covid-19 testing and any violators can be fined up to 2 million won ($1,800).

The Seongnam city government banned the operation of all dance halls and studios through next Sunday.

A kindergarten in Yangcheon District in western Seoul reported at least 18 students, teachers and family members infected with Covid-19 as of Sunday after the first patient was reported last Thursday. This led to the testing of 156 people. A case was also confirmed at a nearby child care center which the sibling of an infected kindergartner attended. Health authorities ordered the testing of all students, staff and family members at the child care center.

A major cluster of infections at a plastic factory in the Jingwan General Industrial Complex in Namyangju, Gyeonggi, added 14 cases and reported a total of 162 Covid-19 patients as of Sunday, according to the KDCA.

The police said it received a tip that the three entertainment facilities were registered as regular restaurants but operated like clubs and were open well after 1 a.m.

Under current social distancing measures, restaurants and nighttime entertainment facilities in the greater Seoul area can operate until 10 p.m.

The police, with the cooperation of Seoul city and district officials, found seven clubs that were not spacing out customers and violating social distancing guidelines.

Since Feb. 15, social distancing measures have been lowered a notch from Level 2.5 to Level 2, the third-highest in a five-tier system, in the greater Seoul area and from Level 2 to Level 1.5 for other regions. Nighttime entertainment facilities such as clubs, bars and room salons that had been previously banned from operating are allowed to operate until 10 p.m. nationwide, but are obliged to enforce mask-wearing and prohibit dancing and table-hopping. The ban on gatherings of five or more people has been retained.