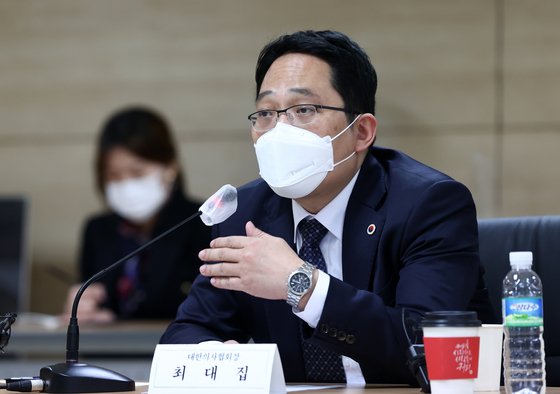 
Doctors threatened a strike ahead of the start of the nationwide Covid-19 vaccination scheme to protest a bill making it easier to cancel medical licenses.

The Korean Medical Association (KMA) protested an amendment to the Medical Service Act that passed in the National Assembly's health and welfare committee Friday that can strip doctors who commit crimes warranting a jail sentence of their licenses.

The KMA, which represents 130,000 doctors, issued a statement Saturday, asserting they will “not accept a revision to the Medical Act that can cancel doctor’s license for crimes punishable by imprisonment including traffic accidents.”

It added that if the bill pushed by the government and ruling party passes the National Assembly’s legislation and judiciary committee, it could call a strike, despite the country’s coronavirus vaccination program being set to kick off on Friday.

The KMA, in the statement supported by 16 municipal and provincial medical associations, warned that this could “clearly create a major obstacle in the Covid-19 response.”

According to the bill, a doctor sentenced to imprisonment or a heavier punishment after being found guilty of serious criminal offenses including murder, robbery or sexual assault will be stripped of their medical license for five years after being released from jail.

In the case of a suspended prison term, the doctor's license will be revoked for an additional two years after the suspension.

The doctors can take steps to obtain the license again after the terms end.

The bill makes an exception for doctors punished for professional negligence resulting in injury or death.

A person who commits a sexual offense against minors will also not be allowed to obtain a medical license, and doctors who conduct sexual crimes involving minors will have their licenses permanently revoked.

The current law stipulates that doctors’ licenses should be revoked for those sentenced to imprisonment for violating the Medical Act.

The parliamentary health committee noted that the law requires other professionals including lawyers to be deprived of their licenses when receiving prison terms or heavier sentences for crimes unrelated to their jobs.

A legislation and judiciary committee meeting has yet to be scheduled.

Prime Minister Chung Sye-kyun said in a Covid-19 response meeting Sunday noted that the KMA “caused many people to worry” after raising the possibility of a strike to protest the amendment to the medical law, “at a time when everybody needs to work together for successful vaccinations.”

He added that the KMA “made it sound like that a doctor’s license will be unconditionally revoked over a traffic accident, glossing over facts. The interests of a certain group cannot take precedence over the lives and safety of the people.”

He warned that the government will “respond strongly” if a strike takes place.

Chung in a Facebook post early Sunday also wrote: “The government will never close our eyes to a strike that will put the public’s sacrifices to waste. In five days, the first Covid-19 vaccinations will begin.”

He added, “As doctors for the people, not just for a medical association, I earnestly request you to fulfill all your social responsibilities.”

He urged against using vaccinations for political disputes.

The KMA has clashed with the government and ruling Democratic Party last summer over plans to increase admissions quotas at medical schools and establish a public medical school, leading to nationwide doctors’ and trainees’ strikes. The KMA agreed to end the nationwide strike last September after the government and ruling party agreed to restart medical workforce reform plans from square one after the Covid-19 pandemic eases.

Choi Dae-zip, president of the KMA, told the JoongAng Ilbo over phone Saturday, “This case is 100 times more serious than the matter of increasing medical school admissions quota or the establishment of public medical schools pushed by the government in August last year. It is about the licenses of 130,000 doctors.”

He said, “We have cooperated closely with the central and local governments on the domestic Covid-19 vaccinations starting on the Feb. 26. Doctors across the country carry a difficult burden handling Covid-19 vaccinations and treatment, but we are doing so silently because it is something we must do. The doctors are outraged over the attempts to pass such a bill at this timing.”

He warned, "If a strike takes place, there will inevitably be a gap in vaccinations and treatment."