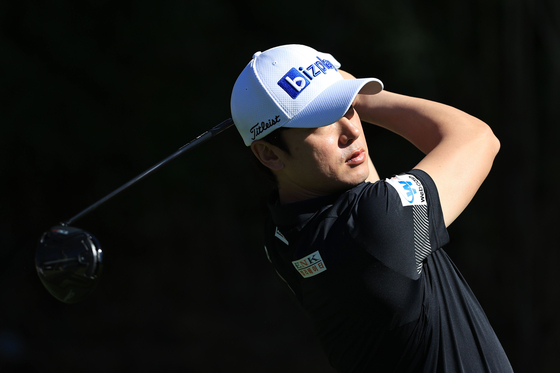 Kim Tae-hoon plays his shot from the 13th tee during the first round of The Genesis Invitational at Riviera Country Club in Pacific Palisades, California on Thursday. [AFP/YONHAP]


Korean golfer Kim Tae-hoon walks away from the PGA's Genesis Invitational this weekend with a brand new Genesis G80, the third free Genesis vehicle he's won himself on the golf course in the last four months.

Kim, a KPGA Tour golfer who attended the PGA event as a sponsor invitee, hit a hole-in-one on the par-3 16th at Riviera Country Club at Pacific Palisades, California, in the first round on Thursday. Making his PGA Tour debut, Kim hit just shy of the mark on the 168-yard 16th, bouncing twice to role straight into the hole for an incredible hole-in-one.

“I didn’t see the ball go in the hole but then I noticed some people up at the green celebrating and realized it went in," Kim was quoted as saying on PGATour.com. "That was [a] pretty special thing to happen on my first PGA Tour event.”

With luxury Korean auto brand Genesis sponsoring the event, a hole-in-one earned Kim his very own Genesis G80, the latest edition to his rapidly-growing fleet of Genesis vehicles.

Last October, Kim won a Genesis GV80 when he won the KPGA's Genesis Championship. That win also earned him the opportunity to compete at the PGA Tour's Genesis Invitational.

Kim then topped the 2020 season points list, also sponsored by Genesis, earning himself a Genesis GV70.

“I gave the first two cars to my parents but I’m not sure yet what I’ll do with this latest one,” Kim said.

Kim's remarkable PGA Tour debut didn't end there. Kim's hole-in-one on the 16th earning him an eagle, his second on his first seven holes after the 11th. Kim is the fourth player ever to make two eagles on the back nine at The Riviera Country Club in the same round, after Scott McCarron in 1997, Sergio Garcia in 2012 and Phil Mickelson in 2017.