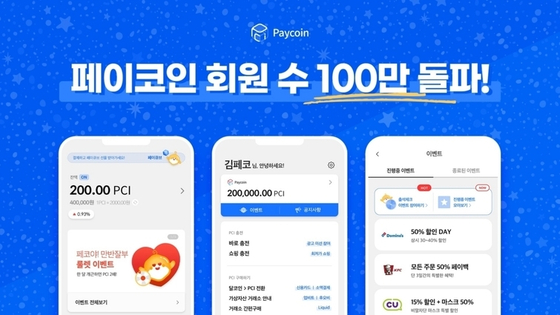 
The number of Paycoin users has broken 1 million as cryptocurrencies boom.

Paycoin is a payment app for cryptocurrencies.

Danal Fintech, operator of Paycoin, announced Monday the number of new app users has recently increased at the pace of about 50,000 daily.

The number of users jumped dramatically since Paycoin announced plans last week to enable transactions on the platform using bitcoin. Bitcoin can be converted into paycoin, Paycoin’s coin, on the platform if bitcoin isn’t supported directly at some stores.

About 60,000 stores accept paycoin. They include convenience stores like CU and 7-Eleven, as well as Domino’s Pizza, Mad for Garlic and Kyobo Book Centre.

Following the announcement, the price of paycoin jumped from 200 won ($0.2) to 5,000 won per coin, while the price of Kosdaq-listed Danal, which operates Danal Fintech, jumped by the daily limit on Thursday, Friday and Monday.

“Partnerships with major coffee brands and renowned theaters are planned in the first half of the year,” said a spokesperson for Danal Fintech. The company “is changing the payment culture of cryptocurrency, which was simply considered an investment means, into something that can be used easily on a daily basis. Once the service of converting bitcoin to paycoin kicks off, a major change in the virtual asset and transaction market are expected because stores that accept paycoin will become stores that can accept bitcoin payments.”

“Tesla’s investment in bitcoin and the current trend of cryptocurrency being developed for use in daily life has raised the value of Danal, which has preoccupied market for platform that supports cryptocurrency transaction,” Kim Jae-yoon, a researcher at KTB Investment & Securities, told local the JoongAng Ilbo.

Security token bill to be submitted by Korea's FSC