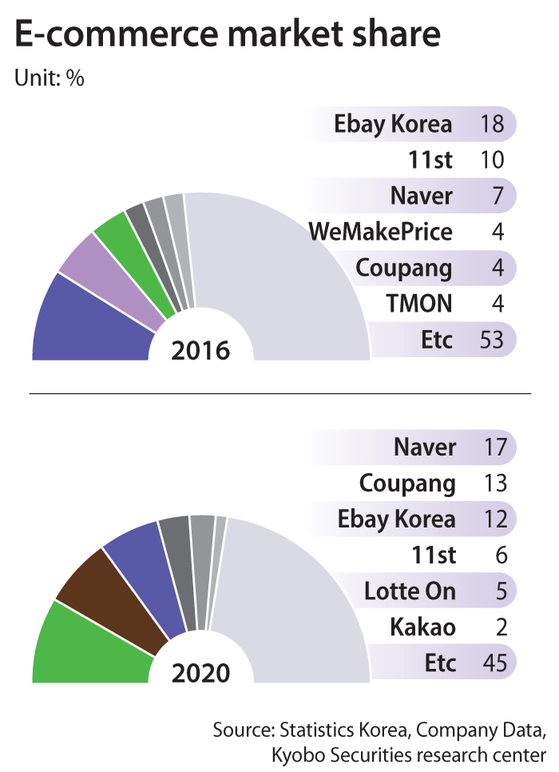 Analysts are taking a fresh look at Korea's online retailers to see what they may be worth after Coupang filed for an initial public offering on the New York Stock Exchange.


Coupang's IPO aims to raise $1 billion, and the valuation of the company has been estimated at around $50 billion -- much higher than the 3.4 trillion won ($3.1 billion) and 5 trillion won market caps of Korean retail giants Lotte Shopping and Emart, respectively, both of which operate online businesses. Emart runs SSG.com and Lotte operates Lotte On.

Extrapolating from Coupang's value, Park Eun-kyung, an analyst at Samsung Securities, believes SSG.com is worth 2.5 trillion won on its own.

“Emart’s current 5 trillion won market cap doesn’t fully reflect the true value of SSG.com, or else, it would mean the value of Emart's businesses, including discount stores and Starbucks, is only 2.5 trillion won” said Park.

“The value of Naver [Shopping] is estimated to be at least 29 trillion won," she continued, "considering that transactions on Naver Shopping are projected to increase to 38 trillion won this year from 27 trillion won last year.”

The market cap of Naver is 63 trillion won, and that includes its online retail, portal and webtoon businesses.

Valuations of these companies are expected to rise, as each has clear strengths that other online businesses don't.

“Based on its offline stores, SSG.com has clear strength in groceries, a market that is growing rapidly, while Naver is a market leader that is expanding through partnerships [including with CJ Logistics],” said analyst Park Ji-won from Kyobo Securities.

As of last year, Naver led the e-commerce market with 17 percent market share, followed by Coupang with 13 percent and Ebay Korea with 12 percent.

“Kakao’s market share in online retail is still low," Park added, "but transactions on Kakao Commerce are growing rapidly and the products they sell like luxury items are profitable." Park added the fact that Kakao Commerce is an online broker that connects customers to sellers without offering delivery services raises the profitability of the business.

TMON is hoping revaluations of e-commerce operators will boost its own reputation before it goes public on a Korean exchange in the second half of this year.

“Before Coupang filed for its IPO, negative views of e-commerce operators were prevalent, and people doubted their ability to make a profit,” said Choi Yang-hwan, a spokesperson for TMON. “I believe such views could change with the Coupang IPO. Expectations for the e-commerce industry could improve, which I believe could positively affect TMON’s value when it goes public.”

Some industry insiders disagree, saying competition among e-commerce operators will inevitably result in some of them falling by the wayside.

“TMON’s presence in the market is low, and it hasn’t been able to make much progress in terms of growth over the past years,” said a source from the industry who wished to remain anonymous.

TMON’s market share shrunk one percent point from 4 percent in 2015 to an estimated 3 percent last year, according to data provided by NH Investment & Securities.

Not every online retailer is expected to benefit from Coupang's Big Bang on the New York Stock Exchange.

Analyst Lee Jee-young from NH Investment & Securities said Coupang’s IPO and a growing of the e-commerce pie “will increase customers and accelerate the growth of the e-commerce market, raising new opportunities.” But, Lee continued, the bigger shopping platforms will probably end up acquiring smaller ones.