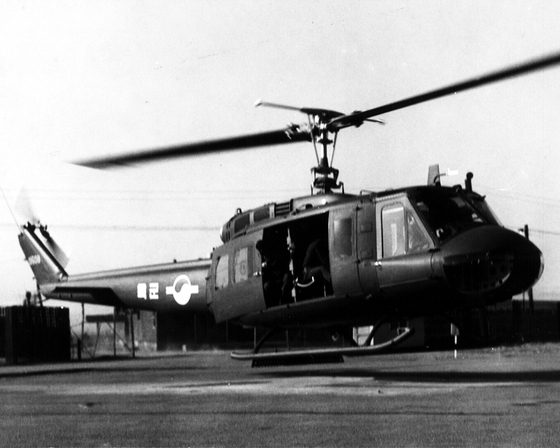 UH-1H helicopters first introduced to the Korean Army in 1968. The Navy still uses these choppers for training. The TH-X project is aimed at retiring such aircraft used by the Army and Navy and replacing them with newer models. [JOONGANG PHOTO]


The Korean military has received bids from five foreign companies for a project to supply training helicopters for the Korean Army and Navy, according to government sources.

The project aims to overhaul the Army and Navy’s older training helicopter fleet made up of MD 500 and UH-1H choppers. The Army has been using the MD 500s since 1976, while the Navy had to make do with even older UH-1H models long retired by the Army.

DAPA held two earlier bidding processes for the TH-X in 2017 and 2019, but both fell apart due to pricing and performance issues. The agency attempted to launch a third bidding process after proposing to hike the budget for the project by 28 billion won, but the tender was rejected by the Ministry of Finance.

The military eventually lowered its performance standards for competing models in this newest bidding process, which includes three models — the Bell 505, Enstrom 450B and MDHI 530F — that competed in the two earlier tenders.

Negotiations fell apart during the first tender because the Bell 505 was priced above DAPA’s target, while the Enstrom 480B and MDHI 530F both failed performance tests in the second round.

DAPA aims to whittle down the number of tenderers to three after an initial review of the bids by early March. Performance tests will follow before negotiations are concluded by the end of this year.

But military pilots voice concern with the expedited bidding process. One training pilot who requested anonymity said he hoped a verified model would be selected in light of already lowered performance standards.

“It would be preferable that a model easy to pilot and with high safety be selected, since these helicopters will be used by novice pilots recently commissioned,” the pilot said.

Among the tenderers, the model with the longest field experience is MDHI’s 530F, used by the U.S. Army. The Kenya Defense Forces and Lebanese Air Force also operate 530Fs outfitted with rocket launchers and machine guns. In November last year, the Pentagon also announced the delivery of five MD 530F light attack helicopters to the Afghan Air Force.

The Airbus H125 and its variants are also used by various European countries like Britain and France. Bell 505 has not yet been delivered for military use, though Japan’s Coast Guard has used the model for training purposes since 2017. The Enstrom 480B and Robinson R66 are used by the Japanese Ground Self-defense Force and the Nigerian Air Force, respectively.

Training pilots in Korea, however, have raised concerns about the suitability of the tenderers. “Some of the models are structured in ways not suited to piloting training,” said one pilot, noting the position of the door on one model that makes it difficult for a pilot to evacuate in the case of an emergency.

“In the end, it is the pilots who know best the issues with each model,” said one high-ranking military source. “[The bidding process] should take into consideration the opinions of pilots following performance testing flights.”