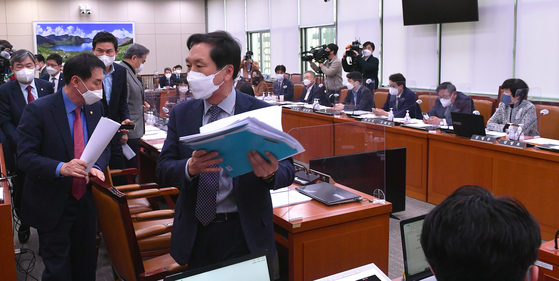 
The ruling Democratic Party (DP) bulldozed the ratification of three key conventions of the International Labor Organization (ILO) through a major committee on Monday, paving the way for a mass expansion of worker unionization in Korea.

Ignoring fierce objections from opposition lawmakers, who walked out of Monday’s committee debate in protest, DP legislators on the National Assembly’s Foreign Affairs and Unification Committee voted to approve the ratification of ILO Conventions 29, 87 and 98, the last step before a final vote is taken on the floor.

While Convention 29, which bans compulsory labor, received bipartisan support during an session on Friday, the other two conventions were subject to fierce debate due to their potential to disrupt the balance of labor-business relations.

The conventions are expected to enable the re-legalization of the Korean Teachers and Education Workers Union, which was banned by the Park Geun-hye administration for putting unemployed teachers on its books.

The main opposition People Power Party argued the ruling party failed to abide by proper procedures in ramming through the ratifications, taking issue in particular with a lack of documentation from the government to assess the impact of the conventions on labor and business ties.

A final ratification scheduled for Friday would put Korea up to global standards on labor rights, allowing the country to shed the dishonor of being only one of seven ILO member states that have not ratified all of the organization’s fundamental conventions on labor.

While Korea joined the ILO in 1991, it falls short when it comes to four of the organization's fundamental labor conventions, including the right to organization and to collective bargaining.

Korea’s failure to meet those standards has led to diplomatic problems. In 2019, the European Union convened a panel of experts to evaluate whether Korea’s failure to ratify the ILO conventions as part of a promise it made when reaching a Korea-EU free trade agreement constituted a violation of the deal.

Following the approval of the ILO conventions by the cabinet last June, the DP used its majority in December to ram through a series of amendments that altered domestic laws to effectively put them on par with the ILO conventions.

Despite opposition from business groups, the amendments allow laid-off workers and the jobless to join unions, require employers to pay labor representatives, and extend the validity of collective bargaining agreements.

Business groups argue the conventions could vastly expand the power of labor in negotiations by inflating union memberships.