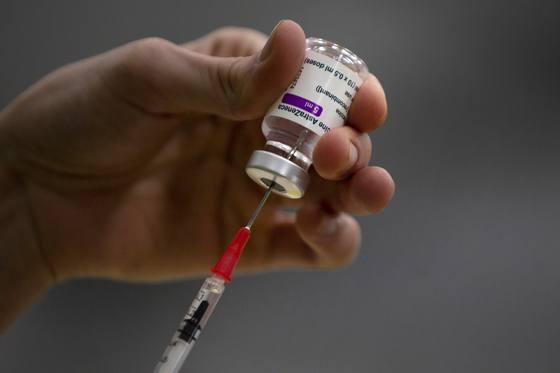 A pharmacist prepares a syringe from a vial of the AstraZeneca coronavirus vaccine during preparations at the Vaccine Village in Antwerp, Belgium, on Feb. 19. [AP]


Politicians are bickering over the main opposition party's idea that President Moon Jae-in must be the country's first person to be given the Covid-19 vaccine to promote the safety of the mass vaccination program.

Yoo Seong-min, a senior politician of the People Power Party (PPP), posted on Facebook last week that Moon should be the country's first recipient of the AstraZeneca shot in order to resolve the public skepticism of the vaccine's safety.

Concerns have been voiced in the international community after a study showed that the Oxford University-AstraZeneca coronavirus jab might be less effective with the new South African coronavirus strain, subsequently forcing South Africa to put its rollout of the vaccine on hold earlier this month.

"The administering of AstraZeneca shots to residents and staff of nursing homes will start on Feb. 26, but some medical staffers are refusing to receive that particular vaccine," Yoo wrote. "President Moon must receive the first shot to ease public distrust."

Moon has said he will take the shot if necessary to boost the people's confidence in the state-run vaccination program. "If the people are insecure about getting vaccinated, and the situation comes to a point that I must set an example, I won't avoid it," Moon said during the New Year's press conference last month.

Health and Welfare Minister Kwon Deok-cheol dismissed the possibility of Moon being the first person in the country to receive the shot.

"The first recipient will likely be someone in a nursing home," Kwon said Sunday in an live-air current affairs program of KBS. "If a high-ranking public official gets the shot first, it can trigger an issue of fairness."

The ruling Democratic Party (DP) attacked Yoo for demanding Moon be the first vaccine recipient to demonstrate the vaccine's safety.

"The president is not a subject of an experiment," Rep. Jung Chung-rae of the DP said Sunday. "The health condition and schedule of the head of the state is a national security confidentiality."

Jung continued to attack Yoo Monday in a Facebook post, saying, "If you are so worried about the people's health and safety, you need to stop picking a fight against the president. You and I should get the shots first."

The PPP responded with more criticism.

Rep. Kim Gi-hyeon of the PPP told CBS Radio on Monday that some leaders of other countries, including U.S. President Joe Biden and Israeli Prime Minister Benjamin Netanyahu, received vaccine shots because they were confident about the safety of their governments' programs as they were administered with vaccines from other manufacturers, such as Pfizer.

"The issue, however, is that they did not receive AstraZeneca shots," Kim said, raising suspicion that the DP doesn't want Moon to receive the shot because the government is uncertain about the safety of the AstraZeneca vaccine.

"The public trust is extremely low about the safety of AstraZeneca vaccines," Kim said. "In a public opinion survey in Germany, 51 percent of the people said they refuse to take AstraZeneca shots. Because of this special circumstance, the president must set an example and get the shot first."

Other PPP leaders, including floor leader Rep. Joo Ho-young, urged the president and other responsible government officials to get the AstraZeneca jabs to calm the people's nerves.

The country's first coronavirus vaccinations are set to kick off at 9 a.m. on Friday, with the administering of AstraZeneca shots to residents and staff of nursing homes and other high-risk facilities who are younger than 65 years old. As of Saturday, more than 289,000 people agreed to the vaccinations.

Pfizer vaccines, secured through the Covax Facility, the World Health Organization (WHO)'s vaccine-sharing mechanism, will be administered to some 55,000 medical professionals treating Covid-19 patients. Of the 58,029 people supposed to receive the Pfizer shots, 94.6 percent agreed to participate in the program.