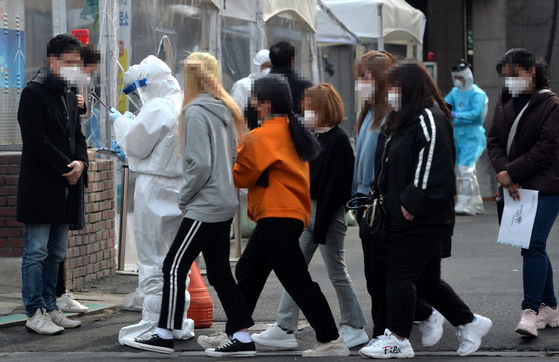 People in line to get tested for Covid-19 at a testing center in Daejeon on Monday. [KIM SUNG-TAE]


Korea recorded 332 new Covid-19 cases Sunday, the first time in a week for daily infections to fall back in the 300s.

The Korea Disease Control and Prevention Agency (KDCA) announced Monday that Korea saw 313 local cases and 19 imported cases of Covid-19 infections on Sunday. The last time Korea’s daily infections were in the 300s was on Feb. 15, when the country saw 343 new cases.

The Ministry of Health and Welfare says it’s still too early for residents in the greater Seoul area, which consists of Seoul, Incheon and Gyeonggi, to relax.

The daily average of new infections in Seoul throughout the past week was 169.6, higher than the average from the week before, which was 143.7.

Recent outbreaks of cases throughout the country are connected to hospitals, hagwon (private cram schools) and factories, as well as personal family gatherings.

Sohn said that the daily counts will be scrutinized through this week before the government makes a decision on changing the current social distancing recommendation.

The greater Seoul area is under Level 2 social distancing recommendations, while the rest of the country is at Level 1.5, until Feb. 28.

Under Level 2, cafes, restaurants, bars, including those that involve dancing, and noraebang (singing rooms) are allowed to operate from 5 a.m. to 10 p.m. every day. Hagwons and theaters are allowed to operate through all hours, but theaters need to leave every other seat empty. Sports games can be watched in person, but only up to 10 percent of its seats may be filled. Weddings and funerals can be hosted with less than 100 people and churches can hold services with up to 20 percent of seats filled.

Under Level 1.5, cafes, restaurants and noraebang can remain open beyond 10 p.m. Bars, including those that involve dancing, are still asked to shut down at 10 p.m. Weddings and funerals can host up to 500 people. Churches and sports stadiums and arenas can fill up to 30 percent of its full capacity of seats.

Throughout the country, the ban of personal gatherings of more than five people that was put in place from December is to continue through the end of the month. Anyone found to be violating the recommendations can be fined.

Korea’s system of rapid testing and tracing to curb the outbreak of Covid-19 cases has been watched internationally, with some praising the system and others raising concerns over its possible infringements on personal privacy rights.

But tracing in Korea may get even faster by next month, according to the Health Ministry.

“It used to take health authorities some two days to collect information on the infected person’s history of credit card purchases [to locate possible points of outbreaks],” Sohn said in the press briefing Sunday. “The system has been improved so that it will take just 10 minutes to collect the information.”

Some of the new cases since late December have included coronavirus variants found in Britain, South Africa and Brazil. As of Sunday, Korea has had a total of 128 variant infection cases.

The country’s first coronavirus vaccinations are set to kick off on Friday with the administering of AstraZeneca shots to residents and staff of nursing homes and other high-risk facilities who are younger than 65 years old. 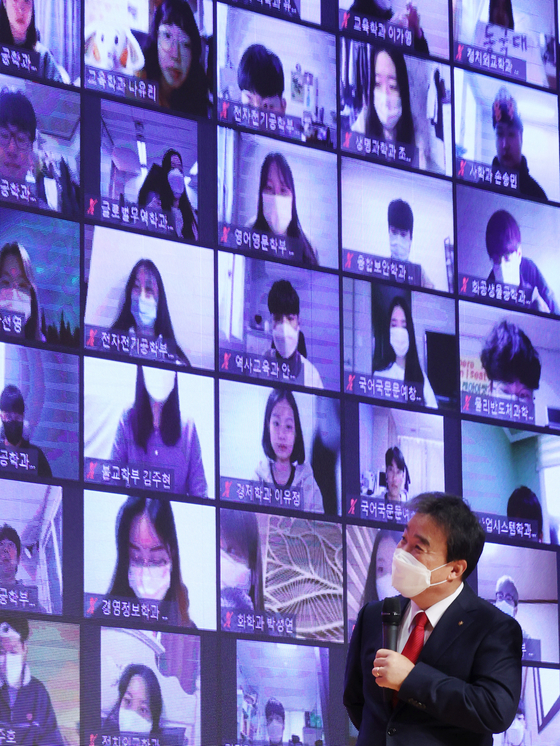 Yoon Sung-yee, president of Dongguk University, talks with freshmen at the entrance ceremony through a video conference at the auditorium in the campus in Seoul on Monday. [YONHAP]

Why the vaccine delay?