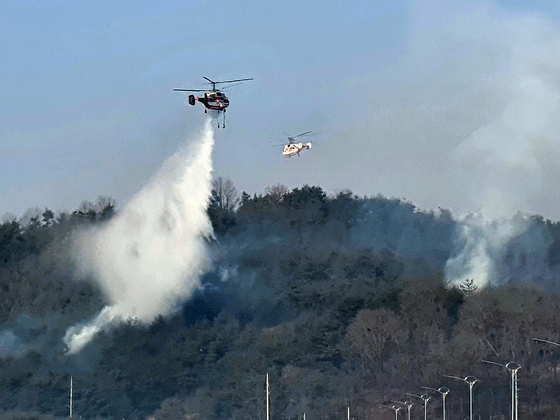 Firefighting helicopters extinguish flames at a wildfire site in Andong, North Gyeongsang on Monday. The fire forced 108 residents in the area to evacuate on Sunday afternoon and evening. [YONHAP]

The largest fire in Andong, North Gyeongsang was brought under control at 12:20 p.m. Monday afternoon after burning for 21 hours, torching approximately 200 hectares (494 acres). The fires in Yecheon and Hadong in North Gyeongsang and Yeongdong and Nonsan in North and South Chungcheong were extinguished earlier Monday morning.

Three smaller wildfires which started Sunday in Geochang, South Gyeongsang and Namwon and Yeosu in North and South Jeolla were extinguished before evening.

In Andong, where flames approached residences and damaged a disused school in the evening, firefighting services established a fire break while residents took shelter in neighboring town halls.

Swaddled in blankets on the heated floor of their makeshift shelter – a senior citizen community center – wide-eyed Andong residents recounted their harrowing escape from the approaching fires.

“A column of fire rose into the air as if a dragon was spurting flames,” said 70 year-old Seo Gui-hong. “Even as the evacuation sirens blared, I was frozen to the spot in panic.”

“I just threw down all the sweet potatoes and ran,” said 68 year-old Park Jae-yong.

The Andong and Yecheon local governments deployed all civil servants to the firefighting efforts. They reported no casualties or serious property damage thus far.

The Forest Service and fire authorities at 7 a.m. on Monday said they deployed more than 70 helicopters from local governments nationwide to fight the flames.

The Forest Service dispatched teams on Monday to investigate the precise causes of the fires. The agency suspects that a garbage incineration effort gone awry sparked the fire in Andong, while it believes that embers from a wood-burning furnace started the fire in Yeongdong.

Officials believe that winds on Sunday afternoon contributed to the spread of the flames.

“If wind speeds reach or exceed five meters (16 feet) per second, flames that would otherwise rise vertically will move laterally, spreading more quickly than usual,” said a source from the Forest Service.

Wind speeds recorded at four of the wildfire sites on Sunday afternoon were between four and five meters per second.

Experts believe that it will take decades to undo the damage done to the forests by the wildfire in 21 hours.

“It takes up to twenty to thirty years after afforestation for trees to properly conduct photosynthesis or carbon dioxide assimilation,” commented Choi Hyeong-kyu, an official from the Forest Service.

In the case of a 2019 wildfire in Goseong, Gangwon, which burned 1,200 hectares (2,965 acres) of forest, the estimated period for the afforestation phase alone is four years.