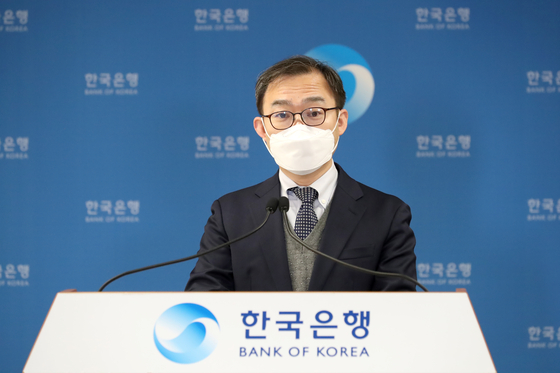 Song Jae-chang, head of monetary and financial statistics team at the Bank of Korea, speaks during an online briefing held Tuesday. [BANK OF KOREA]

Money owed by households continued to grow through the end of last year as people borrowed to buy houses and invest in stocks.

According to data from the Bank of Korea Tuesday, household credit broke 1,700 trillion won ($1.5 trillion) for the first time ever in the fourth quarter last year.

Household credit is borrowings by households from financial institutions, including banks and loan sharks, plus their credit card debt.

As of the last quarter of 2020, household credit amounted to 1,726.1 trillion won, increasing by 44.2 trillion won from the previous quarter. It is the third largest on-quarter rise ever.

The steep increase in household credit was largely due to heavy borrowings by households from financial institutions. They had 1,630.2 trillion won of such loans outstanding in the fourth quarter, 44.5 trillion won more than the previous quarter, the largest quarterly growth ever.

The growth was largely due to people borrowing to buy houses and invest in stocks, said Song Jae-chang, head of the monetary and financial statistics team at the Bank of Korea, during a briefing held Tuesday. Borrowing to cover living expenses also boosted the total.

Credit card debt actually fell in the same quarter by 200 billion won to 95.9 trillion won as people spent less due to the coronavirus pandemic.

Household's credit has been growing at a rapid pace.

Compared to the end of 2019, household credit increased by 125.8 trillion won. This is the largest yearly increase since the 139.4-trillion-won increase in 2016.

While the government implemented tighter rules on unsecured loans in November last year, targeting high-income households that earn more than 80 million won a year, Song said it is hard to tell how much of an impact the tightened rules will have.

"There was already a lot of borrowings from households before the [rule took effect on Nov. 30]," Song said.