Due to the heavy rains and typhoons, your McDonald’s burger could cost you at least 9 cents more.

Other fast food companies are also adjusting their prices in the face of rising costs, with everything from peanut butter cream bread to soboro bread getting more expensive.

“Prices of food ingredients such as chicken, pork, eggs and tomatoes have jumped some 20 percent to 30 percent, and labor costs also rose over the past five years,” a spokesperson at McDonald’s Korea said.

Lotteria increased its burger prices by 100 won to 200 won, with an average increase of 1.5 percent.

“With the price of various expenses increasing, we have raised the prices of some of our products,” said a spokesperson for Paris Baguette. “Prices of the remaining 552 products have not changed."

CJ Foodville’s Tous les Jours early in the month raised the prices of some 90 products, with an average increase of 9 percent.

CJ CheilJedang announced that it will increase the price of Hetbahn ready-made rice by some 6 to 7 percent starting from the late this month. 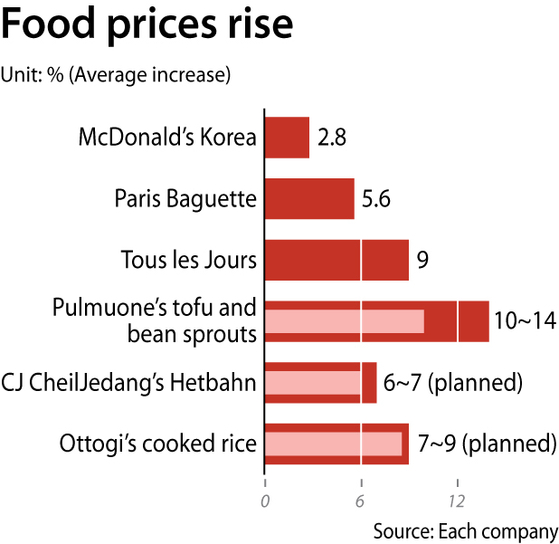 The food companies say the increase of food prices is unavoidable at the moment when the heavy rainfall and a series of typhoons, as well as bird flu, caused a rise in the price of agricultural products.

“Restaurants are trying hard to minimize the increase rate, but it’s unavoidable at the time,” said a source from food industry.