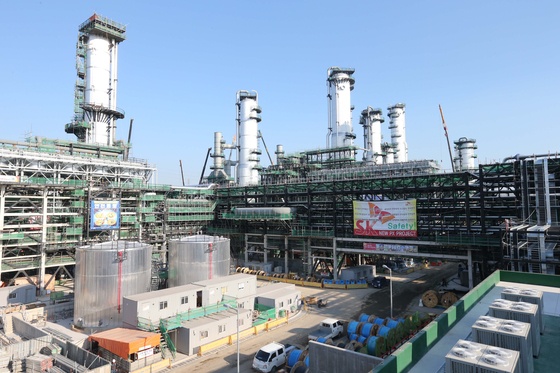 
SK Innovation is selling a minority stake in its wholly-owned SK Global Chemical subsidiary in a deal that could fetch up to 3 trillion won ($2.7 billion).

A spokesperson for SK Innovation said Tuesday that the deal is in the early stages and nothing specific has been decided.

“We’ve been on the lookout for a strategic investor after assigning JP Morgan to manage the sale at the end of last year,” the spokesperson said.

The move is a part of the company’s efforts to reduce its exposure to traditional petrochemical businesses.

The energy and rechargeable battery company will hold a majority stake in SK Global Chemical and sell less than 49 percent.

“One thing clear is that we will maintain a controlling stake,” the spokesperson said.

The chemical subsidiary is valued at over 5 trillion won, which prompted analysts to estimate the size of the sale in the range of 2 to 3 trillion won.

Some media reports mentioned that SK Innovation intends to look for a partner to form a joint venture with SK Global Chemical, a direction denied by the spokesperson.

“We are not intending to set up a joint venture with other companies, rather we are looking for strategic investors interested in creating synergy in business operations,” he said.

SK Innovation mapped out a set of green initiatives aimed at lowering its exposure to carbon-related businesses and bolstering more eco-friendly segments, such as rechargeable batteries for electric vehicles.

Under its “Green Balance 2030” plan, it aims to offset the negative impact on the environment by 2030 and shift its focus more towards the EV battery business.

The proceeds from the offloading of shares will likely go towards funding for the EV battery business.