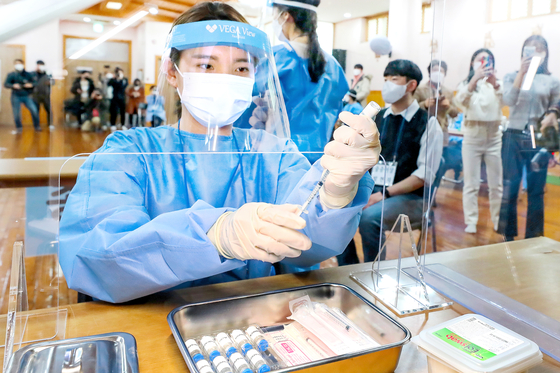 Medical professionals in Gwangju practice administering Covid-19 shots for patients at nursing homes in a mock drill Tuesday under the supervision of quarantine officials ahead of the government’s vaccination program set to kick off this Friday for residents and staff at high-risk facilities nationwide. [YONHAP]


A Korean panel of experts recommended the use of Pfizer’s vaccine in individuals over 16, the Ministry of Food and Drug Safety said Tuesday, ahead of the country’s Covid-19 inoculation program set to kick off Friday.

The advisory committee comprised of seven civilian experts evaluated the efficacy and safety of the Pfizer drug in the first step of a three-tiered review process ahead of the ministry’s final authorization of the vaccine, which showed an efficacy of over 94 percent including in elderly individuals and those with pre-existing conditions.

The committee advised the Drug Safety Ministry to approve the Pfizer vaccine which was shown to be safe and effective in adults, teens between 16 and 17 and seniors 65 and older.

This younger age group, which can cover high school students, and the elderly aged 65 and older are currently excluded from receiving the AstraZeneca vaccines in Korea.

The Pfizer vaccine requires two doses and is an mRNA vaccine which induces immune response by injecting antigen genes into the body to create spike proteins. However, mRNA vaccines require tricky ultra-cold chain storage, unlike the AstraZeneca vaccine which can be stored at refrigerator temperature.

Pfizer is conducting Phase 3 trials in the United States, Germany, Brazil, Argentina, South Africa and Turkey on individuals 12 and older, including seniors 65 and over.

AstraZeneca’s viral vector vaccine was authorized for use by the Drug Safety Ministry earlier this month, but the government is holding off on the inoculation of people aged 65 or older until additional clinical data is available on its efficacy in the elderly.

The first batch of AstraZeneca vaccines — enough to cover 750,000 people, or 1.5 million doses — is manufactured locally at an SK Bioscience factory in Andong, North Gyeongsang, and will be delivered to distribution centers starting Wednesday and distributed to public health centers and convalescent hospitals nationwide beginning Thursday.

Korea will begin inoculations Friday at 9 a.m. with the AstraZeneca vaccine, to be administered to residents and health care workers under 65 at nursing homes and other high-risk facilities.

Korea is set to receive its first batch of Pfizer vaccines on Friday, enough to cover some 58,500 people, through the Covax Facility, the World Health Organization’s vaccine-sharing mechanism.

The administering of the first Pfizer vaccines will kick off Saturday, inoculating some 55,000 frontline medical professionals treating Covid-19 patients.

Korea aims to get 70 percent of its population vaccinated by September and achieve herd immunity by November.

Only 45.8 percent of people surveyed by the Korea Society Opinion Institute said they are willing to be vaccinated “right away” when it's their turn to get the Covid-19 vaccination. The survey was conducted over Friday and Saturday on 1,020 adults 18 and over, and 5.1 percent said they won’t get vaccinated.

However, 93.6 percent of 289,271 residents and staff at nursing homes and high-risk facilities said earlier this month they will receive vaccinations in the government registration process.

Korea reported 357 new virus cases, raising the total infections to 87,681 as of Monday midnight, according to the Korea Disease Control and Prevention Agency (KDCA) Tuesday. 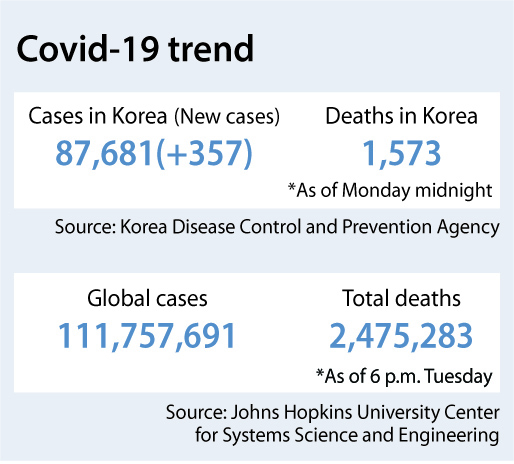 The number of daily infections was similar to the previous day, when the country saw 332 cases, the lowest in a week after infections surged to over 600 in part to outbreaks at industrial sites, hospitals and family gatherings.

There were 27 new imported cases, including eight from the United States, six from Europe and two from Africa.

Variant cases from overseas continue to remain a concern with nine new variant infections confirmed Monday, raising the total to 128.

Outside the greater Seoul area, 14 cases were reported in Gangwon, 12 in Busan, eight in South Jeolla and seven each in Daegu, North Gyeongsang and North Jeolla.

A cluster at Soonchunhyang University Hospital in Yongsan District, central Seoul, added nine cases, bringing total infections to 227 as of Tuesday, according to the KDCA.

A plastic factory in Namyangju, Gyeonggi, reported a total of 179 cases, while a boiler factory in Ansan, South Chungcheong, has 173 cases.