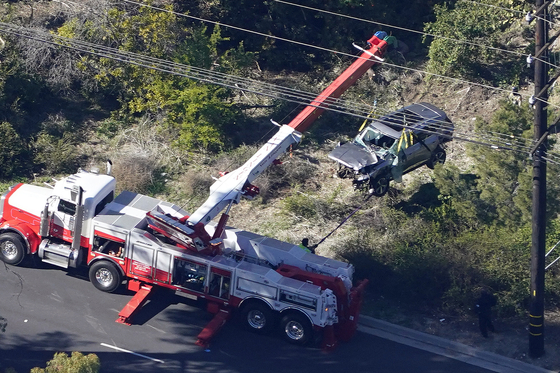 Workers move a vehicle after a rollover accident involving golfer Tiger Woods on Tuesday in Rancho Palos Verdes, Calif., a suburb of Los Angeles.. Woods suffered leg injuries in the one-car accident and was undergoing surgery, authorities and his manager said. [AP]


A luxury SUV made by Genesis was thrust into the headlines Tuesday after American golf legend Tiger Woods survived a rollover crash in California with serious leg injuries.

Woods is recovering from a long surgical procedure, according to a statement posted on his official Twitter account.

"He is currently awake, responsive and recovering in his hospital room," the statement said.

Woods got into a single car accident early Tuesday morning while alone in the GV80 SUV made by Genesis, Hyundai Motor's luxury division. The vehicle was loaned to Woods by the company, which hosted a nearby golf tournament, the PGA Tour's Genesis Invitational. Woods was staying in Los Angeles after promoting the tournament.

Woods hit a center median and then rolled approximately six meters off the opposite side of the road into a grassy area. The vehicle rolled over several times, according to local news reports.

The 45-year-old golfer was sent to a local hospital where he underwent surgery for serious leg injuries.

The injuries, however, were not life threatening, local police were reported as saying.

“The interior, the cabinet of the vehicle was more or less intact,” Los Angeles County Sheriff Alex Villanueva was quoted as saying by CNN Tuesday.

“The front end was totally destroyed, the bumpers, everything totally destroyed. However, thankfully the interior was more or less intact, which kind of gave him the cushion to survive what otherwise would have been a fatal crash.”

Vilanueva also said the section of road on which Woods was driving is known to be a problem area in which drivers often get into car accidents at high speeds.

The sheriff said he thought Woods was traveling at a high speed.

The GV80 SUV is the first SUV launched by the Genesis luxury division of Hyundai Motor. The large SUV started sales in the U.S. last November. Hyundai Motor has big hopes for the model to succeed in the luxury auto market in the U.S.

The GV80 is equipped with 10 airbags and the brand’s top-of-the-line driving assistant system, including a forward collision warning system and evasive steering assist system, which use multiple cameras and sensors.

"This morning, Genesis was saddened to learn that Tiger Woods had been in an accident," said Genesis America in a statement after the accident. "Our thoughts and prayers are with Tiger and his family at this time."

Tiger Woods returns to the fore at the Masters