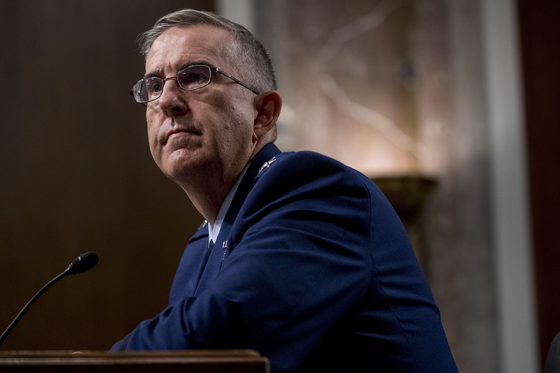 Air Force Gen. John Hyten, the vice chairman of the Joint Chiefs of Staff, said Washington would continue to develop its defensive capabilities in tandem with an evolving offensive threat posed by Pyongyang.

In an online seminar hosted by the Washington-based Center for Strategic and International Studies (CSIS), Hyten stressed there was a “real possibility” North Korea would launch ballistic missiles potentially tipped with nuclear warheads at the United States — something which he said made the regime a different threat compared to other military powers in the past.

The immediate threat posed by Pyongyang has made it the clear focus of America’s missile defense capability at the moment, as opposed to China, Russia and Iran, the general said. Missile interception systems have been installed to defend U.S. territory from North Korean intercontinental ballistic missiles (ICBMs), Hyten added.

“We have to make sure that as we go forward, we maintain the ability to deny the North Koreans the ability to effectively attack the United States with confidence,” Hyten said.

The general in particular cited the weapons unveiled by the North in a imposing military parade held in Pyongyang in October to mark the 75th anniversary of its ruling Workers’ Party.

The regime used the occasion to showcase a new type of ICBM — the biggest yet — as well as what appeared to be a submarine-launched ballistic missile and a host of short-range projectiles.

Such weapons were tested in a series of high-profile experiments by the regime over the past two years and were widely trumpeted by Pyongyang as testaments to its expanding defense capabilities.

In an all-important Workers’ Party congress in January, North Korean leader Kim Jong-un set further goals to modernize the North’s nuclear arms, including raising missile hit rates for objects within 15,000 kilometers (9,320 miles) — which would include the Pacific Ocean and the entire continental United States.

Calling the United States the North’s “foremost principal enemy,” Kim swore off further talks with Washington and vowed to answer force with “toughness and good faith in kind,” though he added Pyongyang’s weapons would never be used pre-emptively.

This deterrence argument has long been used by the North to justify its proliferation of nuclear arms, raised in response to what it sees as an existential threat posed by the United States.

Hyten’s assessment that Kim could attack the United States out of “anger” highlights a prevalent opinion among hard-liners in Washington about Pyongyang’s readiness to enter a nuclear conflict in spite of the vast gap in the two powers' military parity.

Spurred in part by the tensions raised by North Korea’s sixth nuclear test in 2017, Washington is taking no chances in stepping up deterrence capabilities. According to the U.S. Missile Defense Agency, the number of ground-based interceptor (GBI) missiles deployed at Fort Greely, Alaska, and Vandenberg Air Force Base in California has been increased from 44 to 64 after 2017.

Hyten further highlighted that the deployment of next-generation interceptors to replace the GBI systems could further bolster U.S. deterrence against North Korean threats.