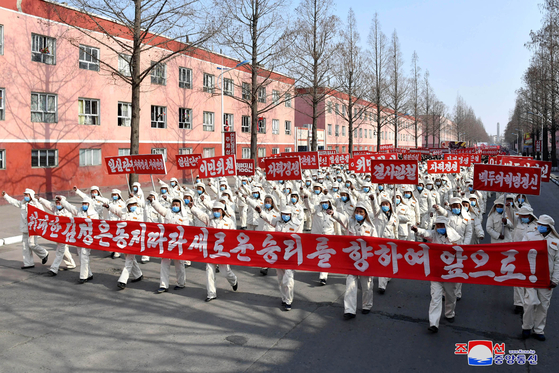 North Korean workers at a steel factory in Hwanghae Province, clad in full anti-epidemic gear, hold a state-sponsored rally on Monday to support the regime's new five-year economic plan, aimed at boosting production levels at such factories. The photo was published by state media. [YONHAP]


The Czech Republic announced Tuesday it was temporarily suspending work at its embassy in Pyongyang due to logistical difficulties caused by North Korea’s border shutdown.

While mum on details, a spokesperson for the Czech Ministry of Foreign Affairs said the embassy would resume its functions “as soon as the situation permits,” according to Radio Free Asia.

The measure highlights an economic crisis in the regime further aggravated by its decision to shut down its borders with China and Russia early last year to prevent the spread of Covid-19.

The border closures, along with ongoing international sanctions and serial natural disasters, has plunged the North’s economy into its worst state since the mid-1990s, when it endured a nationwide famine believed to have killed thousands.

Foreign diplomats, one of the few sources of information outflow from the secretive country, provide a glimpse of the grim reality of life in North Korea, where even the capital city of Pyongyang is struggling with extreme shortages of basic necessities.

Two weeks earlier, Radio Free Asia quoted an employee of the Czech embassy in Pyongyang who said a cutoff of imports have made goods like cooking oil and sugar almost impossible to find, in addition to items like coffee or toothpaste.

Prices of locally produced foodstuffs like vegetables and fruits have also soared in comparison to the year prior, and Pyongyang is prone to frequent electric blackouts, the official said.

Aleksandr Matsegora, the Russian ambassador to North Korea, also detailed similar hardships in the regime in an interview with a Russian news outlet earlier this month.

Many companies have been shut down, leaving their employees out of work, while children have been unable to go to school throughout 2020, the envoy said.

Diplomats and embassy workers have also found it difficult to find consumer goods like clothing and shoes as their prices have jumped three- or fourfold, Matsegora said. Foreigners have been barred from visiting other areas of the country outside Pyongyang since last year, he added.

Since the closure of the North’s borders in January, most foreign embassies in the country repatriated its employees, though the Czech Republic had been one of the few European countries to stay behind along with Russia, Bulgaria, Romania and Poland.

Despite mounting draconian measures to clamp down on the pandemic, North Korea insists it has had no Covid-19 cases on its soil — a claim on which international observers have cast serious doubt.

Throughout 2020, the regime stepped up anti-epidemic restrictions through multiple policies aimed at stopping the virus before it overwhelms the country’s obsolete health care system.

At an all-important party congress held in January this year, North Korean leader Kim Jong-un admitted the country failed to meet development targets amid the 2020 crisis and announced a new five-year plan to boost the country’s ailing economy.

But few details of the new plan outlined by state media suggested it would be different from the regime’s traditional policy of self-reliance. The plan involves a reinforced focus on stepping up ideological education for cadres, stricter oversight on corruption and self-enrichment activities.

Such a fixation on autarky has also played out in North Korea’s refusal to accept international aid to help cushion its crisis.

An editorial published in the regime’s official party newspaper, the Rodong Sinmun, on Wednesday called on workers and officials across the country to resolve “all problems” independently at their respective production units instead of “looking beyond our borders and to the top” for help.